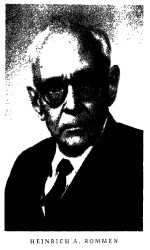 Heinrich Rommen was a Catholic German lawyer who practised in Germany during the Weimar Republic before fleeing to the United States in 1938. He taught in Germany and England before concluding his distinguished scholarly career at Georgetown University.