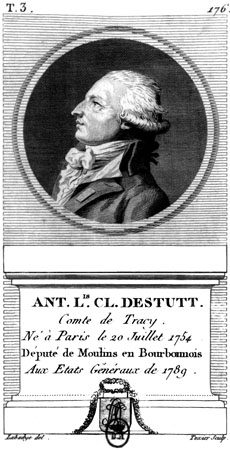 Destutt de Tracy (1754-1836) was a philosophe and one of the founders in the 1790s of the classical liberal republican group known as the Idéologues (which included Cabanis, Condorcet, Constant, Daunou, Say, Madame de Staël), a politician under several regimes spanning the Revolution and the Restoration, and an influential author. His writings particularly impressed Thomas Jefferson, who translated an published 2 of them in America. While a member of the Senate, he opposed Napoleon, and also spoke out against the subsequent constitutional monarchy, and in support of American-style laissez-faire republicanism. He coined the term “ideology” while he was at the Institut National.