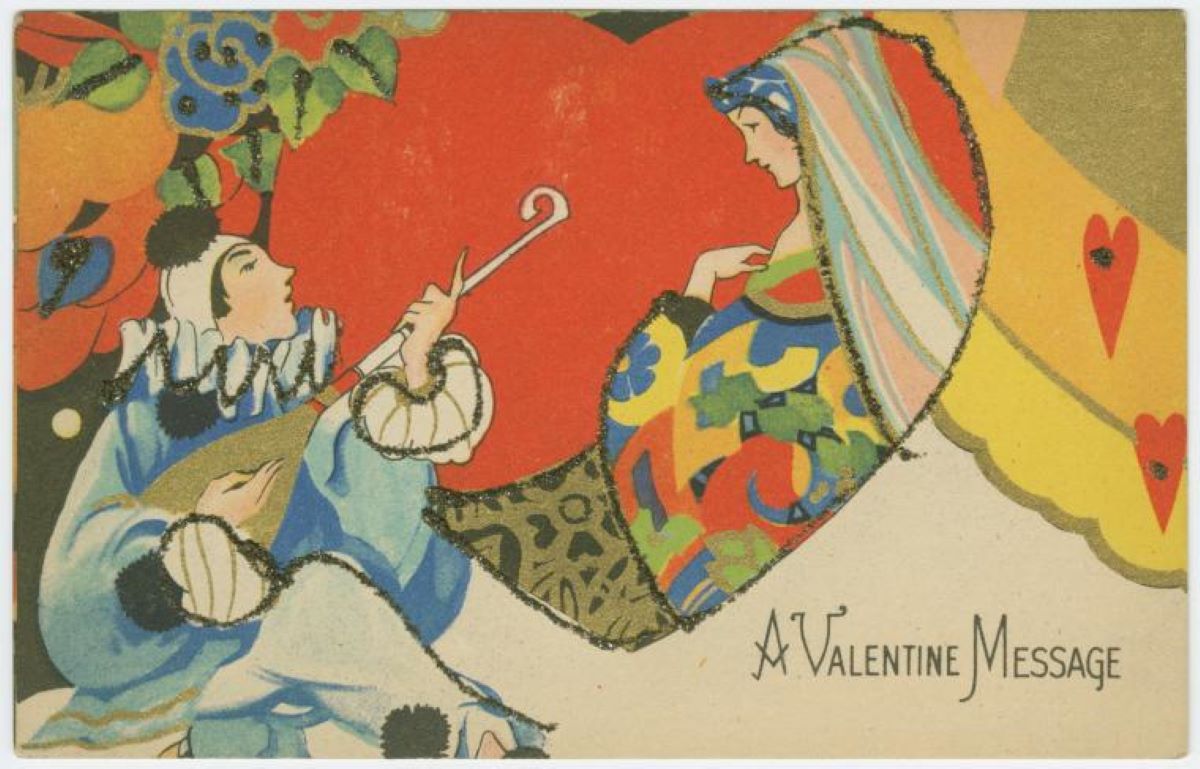 Valentine’s Day is all but guaranteed to inspire some kind of case of the feels. Some of us love the hearts, flowers, and the unbridled romance of it. Some of us can’t stand it and flee like a vampire exposed to light. Some of us see it primarily as the day before the chocolate aisle at the grocery store gets marked down 50%. Whatever sort of feels you may be having today, the Online Library of Liberty has reading recommendations to get you through them.

♥ Are you a true romantic? Do you swoon and sigh? Are rose petals and an intimate dinner a deux in your plans? Try these readings as accompaniment to your Valentine’s Day:
Petrarch’s Sonnets and Love Songs: Petrarch may not have invented pining for an unattainable beloved, but he certainly perfected it. The poems and sonnets that record his devotion to his beloved Laura have been making hearts beat faster since the 14th century.

Dreams bore my fancy to that region where
She dwells whom here I seek, but cannot see. (Sonnet 10)

Shakespeare’s Sonnets--English poets took up Petrarch’s model and started a positive crazy for sonnet sequences that translated his work and explored, restated, and responded to his themes. Shakespeare’s 154 sonnets built him a literary reputation before he was a famous playwright, and their representations of love’s complexities remain compelling today.

For thy sweet love remembered such wealth brings
That then I scorn to trade my state with kings. (Sonnet 29)

♥ Are you fascinated by love’s ups and downs? Is it the drama that you’re after? You’ve probably already read it, but it would be irresponsible of us not to suggest:
Romeo and Juliet: What’s there to say? It’s the great-grand-daddy of all romantic drama.

My bounty is as boundless as the sea,
My love as deep. The more I give to thee,
The more I have, for both are infinite. (Act 2, Scene 2)

♥ Are you more the cynical type? Do you wear black to your friend’s pink and red themed Valentine’s Day party? We’ve got you covered as well:
Adam Smith isn’t everyone’s first choice when thinking about romance. His thoughts on the general ridiculousness of romantic love neatly demonstrate why.

The passion appears to every body, but the man who feels it, entirely disproportioned to the value of the object; and love, though it is pardoned in a certain age because we know it is natural, is always laughed at, because we cannot enter into it. (TMS)

Mary Wollstonecraft’s A Vindication of the Rights of Women is justly famous for its clear-eyed assessment of the damaging cultural assumptions and institutions that informed romantic relationships in her day.

Strengthen the female mind by enlarging it, and there will be an end to blind obedience; but, as blind obedience is ever sought for by power, tyrants and sensualists are in the right when they endeavour to keep women in the dark, because the former only want slaves, and the latter a play-thing. The sensualist, indeed, has been the most dangerous of tyrants, and women have been duped by their lovers, as princes by their ministers, whilst dreaming that they reigned over them. (chapter 2)

♥ Perhaps you’re just inclined to stand on the sidelines and be amused by the whole crazy mess that is Valentine’s Day. Have a look at some of the funnier looks at love and relationships on the OLL:
Geoffrey Chaucer’s Parlement of Foules: Chaucer’s Parlement of Foules may well be the source of the folk belief that birds choose their mates on Valentine’s Day. But what happens when the birds don’t feel like cooperating?

The life so short, the craft so long to learn,
The assay so hard, so sharp the conquering,
The fearful joy that slips away in turn,
All this mean I by Love, that my feeling
Astonishes with its wondrous working
So fiercely that when I on love do think
I know not well whether I float or sink. (lines 1-7)


Aristophanes’s Lysistrata: This political comedy set during the Peloponnesian War recounts what happens when the women decide to persuade the men to end the war and return to peace by denying them what they really want: sex.

But not even a spark of a paramour is left; for since the Milesians betrayed us, I have not seen a thing of the kind, which might have consoled us in the absence of our husbands. Would you be willing, therefore, with me to put an end to the war, if I were to find a contrivance?

♥ As for those of us behind the scenes at the Reading Room? We’ll be reading, as always, whatever catches our fancy. But I suspect a lot of us might find a little time to read the ever-interesting David Hume and his essay “Of Love and Marriage.” Then we're definitely hitting the chocolate sales.

I have often had thoughts of complying with this humour of the fair sex, and of writing a panegyric upon marriage: But, in looking around for materials, they seemed to be of so mixed a nature, that at the conclusion of my reflections, I found that I was as much disposed to write a satyr, which might be placed on the opposite pages of the panegyric: And I am afraid, that as satyr is, on most occasions, thought to contain more truth than panegyric, I should have done their cause more harm than good by this expedient. (Essays Withdrawn and Unpublished: Essay V)