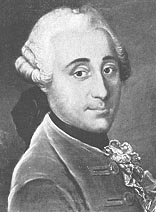 Jean-François, Marquis de Saint-Lambert was a poet, soldier, and friend of Voltaire and Diderot. His plays and, especially, his highly scientific and philosophic poetry led to his selection by the Académie Française in 1770, where he became influential.

The poet Jean-François, Marquis de Saint-Lambert, was born into a poor and obscure noble family in 1716. After a Jesuit education, he served in the infantry and for the king of Poland. Stationed at Lunéville, he was acquainted with Voltaire, fell in love with his mistress Emilie du Châtelet, and sired a child by her. When she died in childbirth (1749), he gained notoriety and moved to Paris, where his poetry began to attract attention. Voltaire described his now-obscure Les Saisons as “the only work in our century that will pass into posterity.” In the Seven Years War, he became a colonel for the French army, though an attack of paralysis led him to leave the military career for good in 1758, and instead pursue a life of letters. He was friendly with the Encyclopédie circle, including Diderot, Mme. Geoffrin, d’Holbach, Grimm, Mme. d’Epinay, and especially Mme. d’Houdetot, with whom he had an affair that was celebrated for its dignity and fidelity until his death nearly half a century later. His plays and, especially, his highly scientific and philosophic poetry led to his selection by the Académie Française in 1770, where he became influential. His Catéchisme universel, a lengthy work on the origins and nature of human morality, won the grand prize for morale at the Institut in 1810. Saint-Lambert died in 1803.