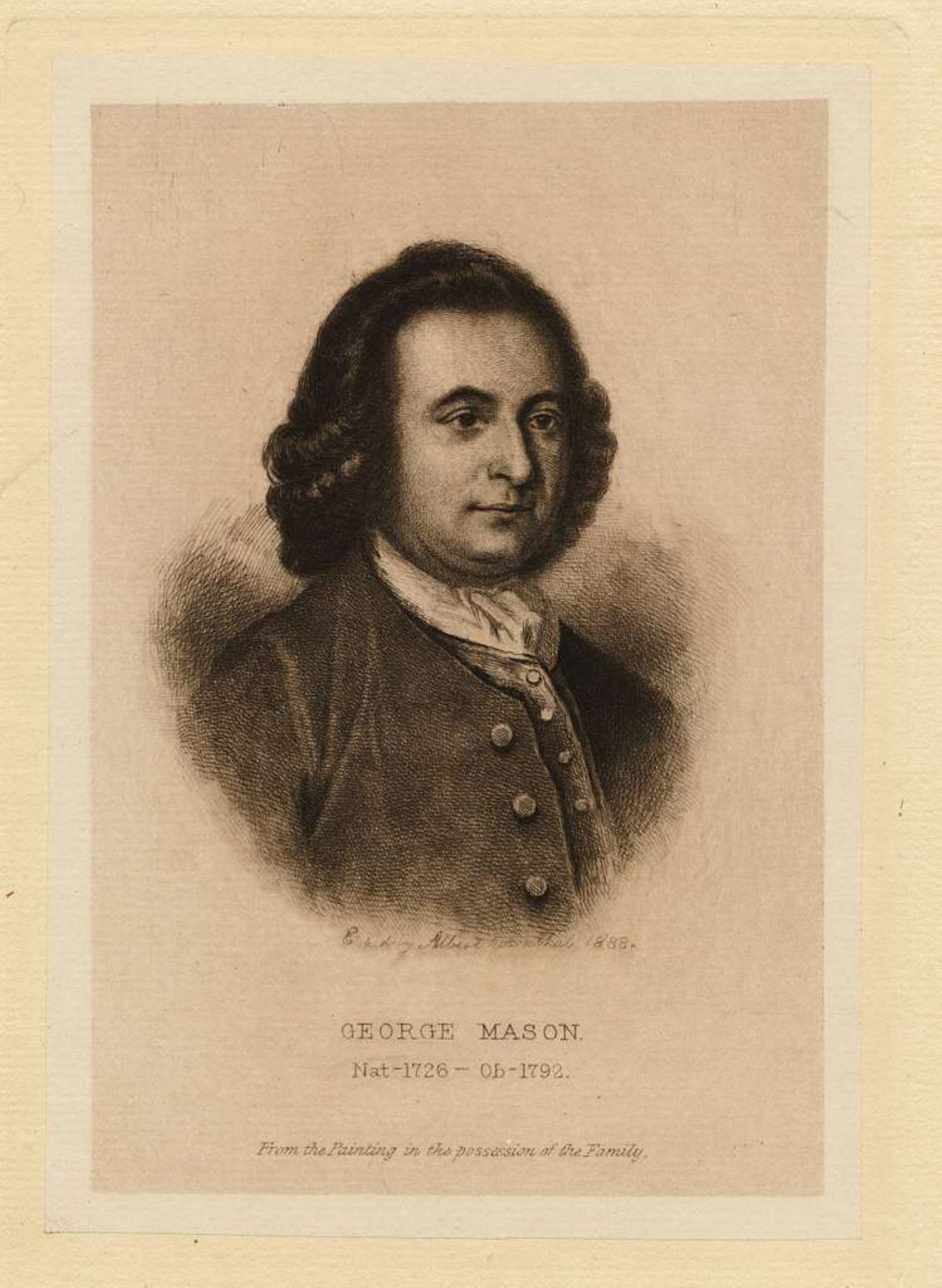 George Mason was born on December 11, 1725, in Fairfax County, Virginia. His parents died in a boating accident when he was 10, and he was taken in by John Mercer, an uncle, who was both a lawyer and a voracious reader. In 1736, George Mason began his education under the tutelage of Mr. Williams. He continued his education under Dr. Bridges in 1740, a progenitor of the Society for the Promotion of Christian Knowledge. After Mason returned to his estate, he continued to access Mercer’s library as a way of informally continuing his education. This proved successful, with contemporaries, including Philip Mazzei, declaring him a genius comparable to Dante, Machiavelli, Galileo, or Newton.

At 21, in 1746, Mason inherited his father’s estate, which included lots of land and dozens of slaves. The next year, Mason joined the Fairfax County Court and, in 1748, tried to win a seat on the House of Burgesses yet failed to win the election. Mason was also interested in real estate speculation and Western Expansion. He invested in the Ohio Company, and planned to develop, trade, and sell land on the upper Ohio River in 1749, something he stayed involved in until he died.


Mason continued his court duties until 1752, when he stopped attending until 1764. In his time away from the court, he sought out again the House of Burgesses seat in 1758 and this time won. Upon taking this office, he was appointed to the Committee on Propositions and Grievances and the Committee on Privileges and Elections, though he stopped attending sessions between 1759 and 1761. His disdain for politics was palpable in his writing, advising his sons to “prefer the happiness of independence and a private station to the troubles and vexations of public business.” Despite leaving office, Mason remained influential in Virginia politics. He published a response to the Stamp Act of 1765, which condemned the institution of slavery, and advised George William Fairfax and Washington on how to cause replevin, a common court action, to occur without the use of stamped paper. This contributed to the boycott of British stamps, which prompted the British Parliament to repeal the act the next year. Mason advised Washington on a few other occasions on how to oppose the British.


However, Mason’s efforts culminated in establishing a militia independent of the royal government in 1774. The next year, he became the leader of the Virginia patriots, where, working with George Washington, he procured large amounts of gunpowder and implemented annual elections for militia officers, to avoid appearances of birthright privilege.


In 1776, as Washington became a delegate of the Second Continental Congress, Mason was selected to be his replacement as Fairfax County’s delegate to the third Virginia Convention. He made several attempts to avoid taking on this responsibility, citing his poor health and the importance of parenting his children, as his wife had died a few years before in 1773. He was assigned to the Committee of Safety. Drawing from Magna Carta, the English Petition of Right of 1628, and the English Bill of Rights, Mason authored Virginia’s Declaration of Rights, which became the first authoritative formulation of inalienable rights. From these documents, Mason derived many ideas which became enshrined in either the Declaration of Independence or the Constitution, such as these: The role of government is to secure and protect rights, failing to do so, people have a right to amend or abolish it. Property could not be taken for public use without the owner’s consent. A citizen could only be bound by a law accepted by the person or elected representatives. If accused, a person had a right to a speedy and local trial, and was able to face his accusation, with the ability to call for evidence and witnesses.


His opposition to slavery and concern for individual rights made its way into the Constitutional Convention of 1787. George Mason opposed the continuation of the slave trade, in favor of leased land, manumission, education for bondsmen, and a system of free labor. He was also skeptical of plans to create the Constitution, fearing that large and indefinite powers vested in the document would be used against local interests and individual rights. Mason ended up being one of the three delegates that refused to sign the Constitution. His Objection to this Constitution of Government was widely cited by antifederalists to oppose federal power.


George Mason’s legacy demonstrates that good ideas, such as individual rights, are able to be widely adopted. Despite losing the battle over the Constitution, the subsequent inclusion of the Bill of Rights demonstrates that ideas carry weight. Mason’s lonely stand reminds us that individuals can make the difference in the fight for justice and freedom.