The Petition exhibited to his Majesty by the Lords Spiritual and Temporal, and Commons, in this present Parliament assembled, concerning divers Rights and Lib-erties of the Subjects, with the King’s Majesty’s royal answer thereunto in full Parliament 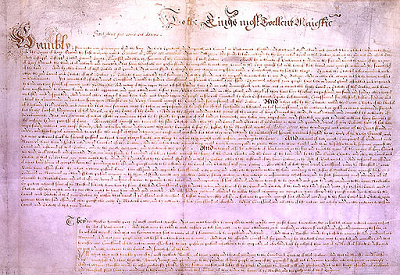 To the King’s Most Excellent Majesty,

Humbly show unto our Sovereign Lord the King, the Lords Spiritual and Temporal, and Commons in Parliament assembled, that whereas it is declared and enacted by a statute made in the time of the reign of King Edward I., commonly called Statutum de Tallagio non concedendo, that no tallage or aid shall be laid or levied by the king or his heirs in this realm, without the good will and assent of the archbishops, bishops, earls, barons, knights, burgesses, and other the freemen of the commonalty of this realm; and by authority of Parliament holden in the five-and-twentieth year of the reign of King Edward III., it is declared and enacted, that from thenceforth no person shall be compelled to make any loans to the king against his will, because such loans were against reason and the franchise of the land; and by other laws of this realm it is provided, that none should be charged by any charge or imposition, called a benevolence, nor by such like charge; by which the statutes before mentioned, and other the good laws and statutes of this realm, your subjects have inherited this freedom, that they should not be compelled to contribute to any tax, tallage, aid, or other like charge not set by common consent, in Parliament:

[Which Petition being read the 2nd of June, 1628, the King’s answer was thus delivered unto it.

The King willeth that right be done according to the laws and customs of the realm; and that the statutes be put in due execution, that his subjects may have no cause to complain of any wrong or oppressions, contrary to their just rights and liberties, to the preservation whereof he holds himself as well obliged as of his prerogative.

This form was unusual and was therefore thought to be an evasion; therefore on June 7 the King gave a second answer in the formula usual for approving bills: Soit droit fait comme il est désire.]