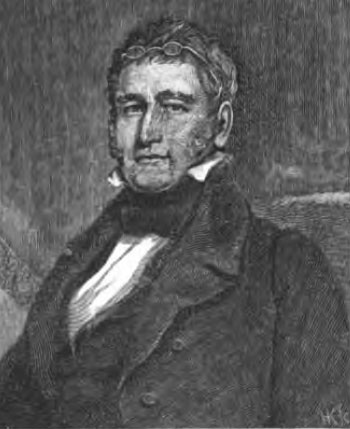 John Rowan was born in Pennsylvania in 1773. He studied law in Lexington, was admitted to the bar in 1795, and became a successful criminal lawyer and wellknown orator. A member of the Kentucky constitutional convention in 1799, he was Kentucky secretary of state from 1804 to 1806, when he was elected as a Republican to the United States House of Representatives for one term. Rowan was a member of the Kentucky House of Representatives from 1813 to 1817, in 1822 and 1824, and was a judge on the state court of appeals from 1819 to 1821. In Kentucky politics, he was a supporter of debtor relief measures and a critic of judicial conservatism. He was appointed by the legislature to adjust a boundary dispute with Tennessee in 1820, and a land claims dispute with Virginia in 1823. Rowan was elected as a states’ rights Republican to the United States Senate in 1825. He served one term and was involved in efforts to reform the federal judicial system and abolish imprisonment for debt. In 1839 he was appointed commissioner for carrying out a treaty with Mexico.