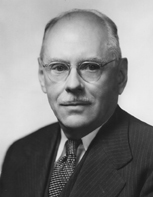 Frank Knight went from a farming childhood in Illinois to teaching at the University of Chicago, where he influenced many modern economists, including Nobel Laureate James Buchanan. His works on risk and uncertainty created a foundation for economic theory while repeatedly drawing on evidence and the everyday experiences of business owners, families, and ethical considerations. [The image comes from “The Warren J. Samuels Portrait Collection at Duke University.”]

Read the Liberty Classic A Century of Risk, Uncertainty, and Profit from Econlib