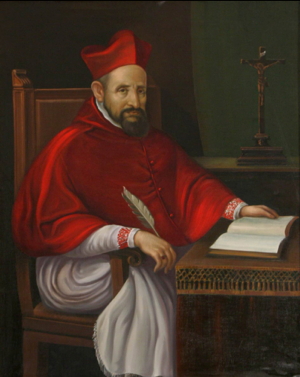 Robert Bellarmine (1542–1621) was a Jesuit cardinal and a celebrated professor of theology at the Roman College, of which he became rector in 1592. He was also a highly ranked member of the Inquisition and of the Congregation of the Index, as well as Pope Clement VIII’s main advisor in theological matters. However, Bellarmine’s work risked being included in the Index of Prohibited Books for insufficient support of papal authority. At the same time, he was considered a major enemy of the absolute authority of sovereigns, such as James I of England.