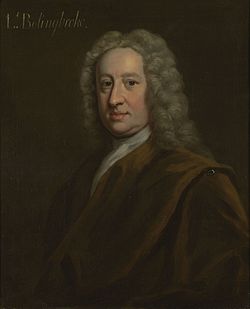 Henry St. John, 1st Viscount Bolingbroke (1678 – 1751) was a prominent Tory politician in England and later became a major political advocate in opposition to the Whig Party. During his exile in France, he encountered the ideas of the French Revolution and wrote several books, including Reflections upon Exile and Reflections Concerning Innate Moral Principles.