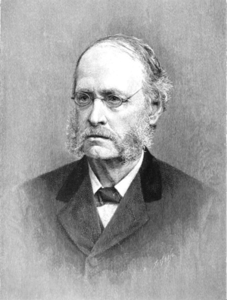 David Ames Wells (1828-1898) was born in Springfield, Massachusetts and trained as a scientist and engineer. He came to the attention of Abraham Lincoln during the Civil war with his writings on government debt, for which he was appointed chairman of the National Revenue Commission. Although he began as a protectionist he became a defender of free trade in the late 1860s and early 1870s and was an advisor to Pres. Grover Cleveland. He translated and edited some of Frédéric Bastiat’s writings which were printed in America. He wrote several books on tariffs and tax matters: The Silver Question (1877); Why We Trade and How We Trade (1878); Our Merchant Marine (1882); A Primer of Tariff Reform (1884); Practical Economics (1885); Recent Economic Changes (1889); Breakers Ahead: Cause of the Present Crisis (1896); and The Theory and Practice of Taxation (1900). He also wrote the article on “Free Trade” (1882) for Lalor’s Cyclopedia of Political Science, Political Economy, and of the Political History of the United States (1881-84).