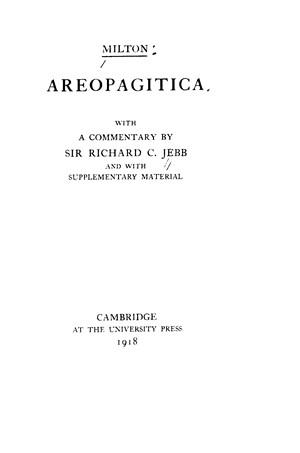 An edition based upon Sir Richard Jebb’s lectures at Cambridge in 1872, with extensive notes and commentaries on this famous work: Milton’s famous defense of freedom of speech. It was a protest against Parliament’s ordinance to further restrict the freedom of print. Milton issued his oration in an unlicensed form and courageously put his own name, but not that of his printer, on the cover.

Areopagitica, with a Commentary by Sir Richard C. Jebb and with Supplementary Material (Cambridge at the University Press, 1918).