This timeline shows the life and work of one of the greatest English poets and a leading figure in the English Revolution. As John Alvis notes in his introduction to a Liberty Fund edition of Milton's political writings:

Throughout his career as poet, political theorist, and embattled publicist, John Milton pursued the one paramount project of discovering ground for his love of liberty in laws of nature and of nature’s God. This effort required a delay of his plans for a national epic during a two-decade interval wherein Milton produced a series of prose works defending and seeking to affect the course of the Puritan revolution. Inspired by specific occasions, these writings were responses to antagonists within his party, preemptive strikes against Royalist partisans, or appeals to Parliament. Though Milton professed to deprecate these pamphlets as work of his “left hand,” they develop a carefully articulated course of thought and reveal connections between principle and consequence on the order of acuity one looks for in works of more than partisan polemical intent and transitory significance.

Milton concerned himself with a diversity of issues: church government, divorce, freedom of thought, speech, and press, British constitutional history, church-state relations, the characters of regimes, the political implications of Christianity, the nature of representation in Parliament, the interdependence of civil and personal virtue, the progress of Reformation. Diversity of subject answers always, however, to the unifying theme of preparing individuals to understand and cultivate that coordination of freedoms and responsibilities that Milton identified in the phrase “Christian liberty”—that is, the freedom to work out one’s salvation won for all mankind by the Savior’s intercession, example, and express teachings.

The timeline is also available in a larger JPEG image (1337 pixel wide) and in PDF format (36 KB).

Key: contemporary historical events are in green; publications are in red; events in the life of Milton are in blue. 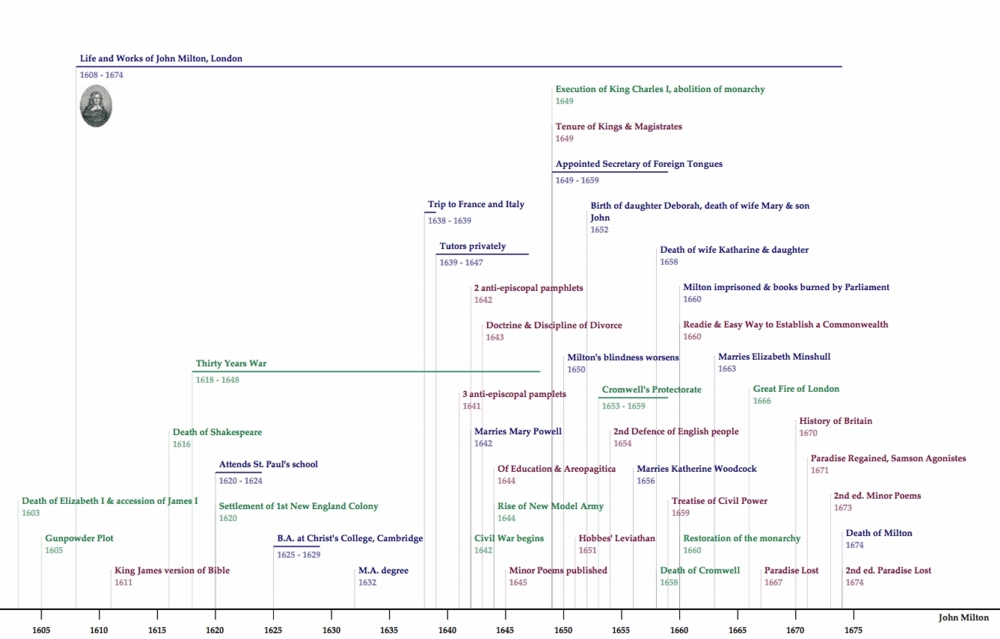