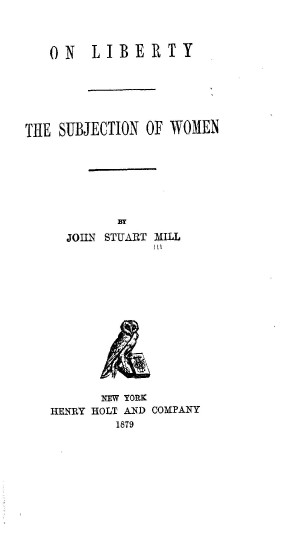 This is an interesting edition from 1879 which combines On Liberty (1859) and The Subjection of Women (1869), which were originally published separately, in a single edition. Mill had been somewhat coy about publishing The Subjection of Women during his lifetime because he feared the condemnation of his peers for daring to apply the general notions of individual liberty which he had clearly spelled out in On Liberty to the particular case of women. So he withheld publication until just before his death. It was left to an enterprising publisher after the author’s death to recognize the connection between the two works and to combine them in a new edition. This was something which was not done again until the 1970s when the significance of Mill’s writings on women were again appreciated.

On Liberty and The Subjection of Women (New York: Henry Holt and Co. 1879).