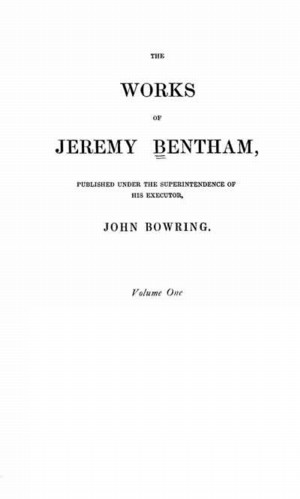 The Works of Jeremy Bentham, published under the Superintendence of his Executor, John Bowring (Edinburgh: William Tait, 1838-1843). 11 vols.

“Correspondent to discovery and improvement in the natural world, is reformation in the moral: if that which seems a common notion be, indeed, a true one, that in the moral world there no longer remains any matter for discovery. Perhaps, however, this may not be the case: perhaps among such observations as would be best calculated to serve as grounds for reformation, are some which, being observations of matters of fact hitherto either incompletely noticed, or not at all, would, when produced, appear capable of bearing the name of discoveries: with so little method and precision have the consequences of this fundamental axiom, It is the greatest happiness of the greatest number that is the measure of right and wrong, been as yet developed.”