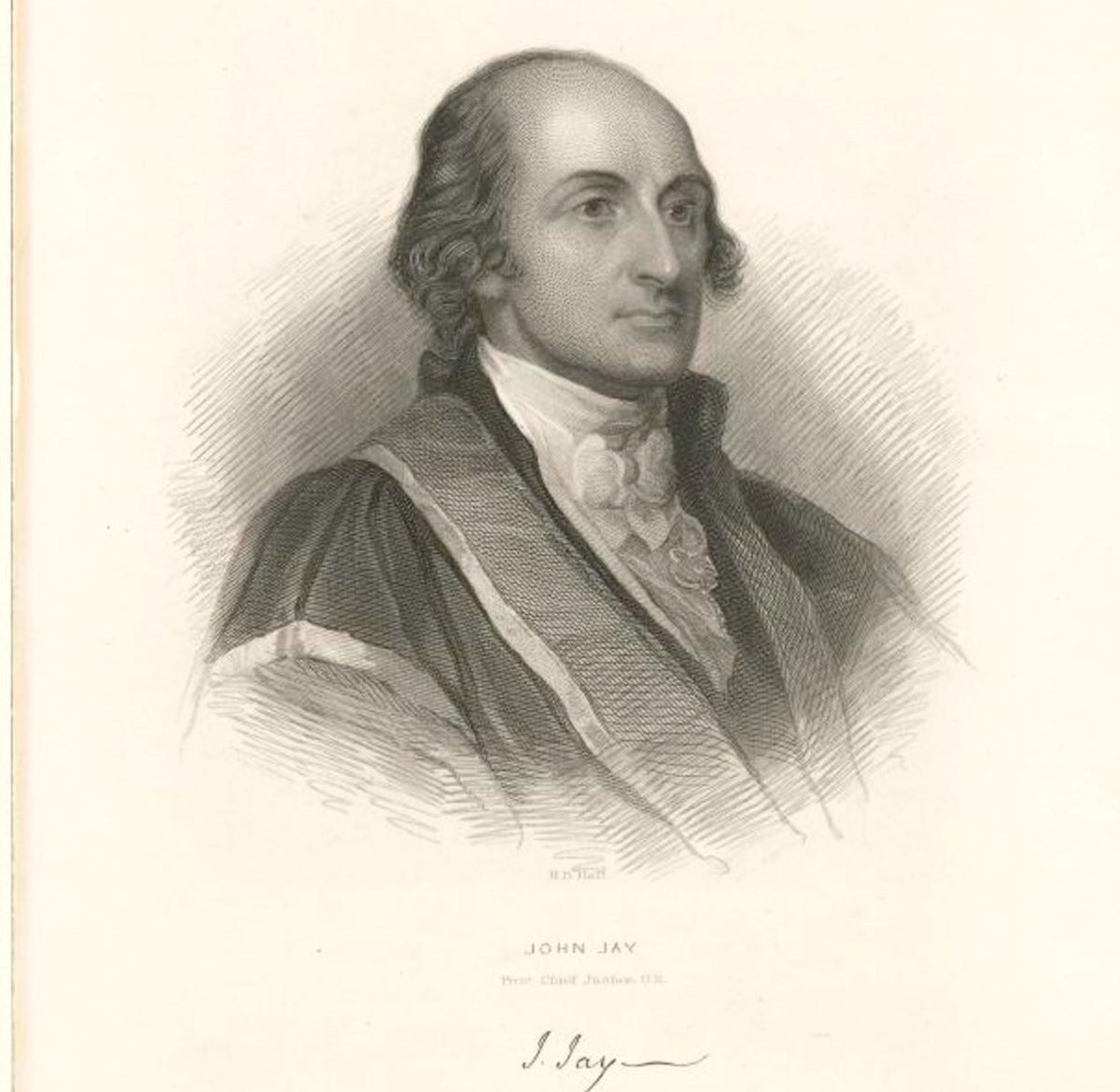 John Jay (1745–1829) was one of the most significant members of the founding generation, but his reputation hasn’t kept pace with that reality. Most Americans, if they wrack their brains, might be able to come up with vague memories of the Jay Treaty, his contributions to the Federalist Papers, or his place on the Supreme Court.

A quick glance at his resume suggests tremendous contributions over 27 years in public service. Trained as a lawyer in New York, Jay served as President of Congress, Ambassador to Spain, Negotiator of the Paris Peace Treaty that ended the War for Independence, Secretary for Foreign Affairs under the Articles of Confederation, first Chief Justice of the Supreme Court, special diplomat to England, and two-term governor of New York. In these roles, Jay regularly worked with other well-known founders such as George Washington, John Adams, Benjamin Franklin, Alexander Hamilton, and Thomas Jefferson.


Through these efforts, we could identify many important contributions, such as his persistent diplomacy in the American national interest or his growing public opposition to slavery.


Early in the American Revolution, Jay realized that after declaring independence, New York needed a new legal structure. Thus, he was active at New York’s first constitutional convention, helping to structure its state government in a responsible way. With that constitution in place, Jay sought the appointment as first Chief Justice of New York.


This same constitutional concern informed Jay’s actions a decade later when considering national affairs. At that point, Jay was serving as the Secretary of Foreign Affairs for Congress, the permanent position under the Articles of Confederation tasked with implementing treaties and diplomacy. From that position, Jay witnessed the weaknesses of the Confederation and testified that a lack of national structure was leading to violation of treaties and infringement on rights. To rectify that, Jay corresponded with figures such as Washington and Adams, both to diagnose the problems and present a way forward.


Although New York did not appoint Jay to the Constitutional Convention, he approved of the proposed Constitution. He eagerly partnered with Alexander Hamilton and James Madison on the project of drafting essays for the newspapers—the essays that would become the Federalist Papers. In 1787, Jay was the most senior and well-known of the trio. He launched into the project, contributing (after Hamilton’s #1) the next four. His contribution likely would have been even greater had he not been injured in a street riot in New York City, followed by a lingering illness through the winter.


Still, Jay’s contributions made several important points. In #2, Jay advanced a vision of national flourishing if the country could recognize and formalize its preexisting union, found in its geography, language, culture, and shared sacrifice in the War for Independence. Subsequent contributions discussed the need for national unity for issues of war and peace. His final essay (#64) argued for effective control of diplomatic affairs, which he believed could be handled better in the Senate than in a wide open assembly.


Jay advocated for the Constitution not only in the Federalist Papers but in a stand-alone essay, “An Address to the People of the State of New-York.” Here, Jay urged practical considerations for New Yorkers. Their trade would be enhanced by entering the new Constitutional union. If the Constitution was imperfect, amendment from within was a better alternative than expecting a new convention to produce an ideal document.


Finally, Jay demonstrated suave political tactics at the New York ratifying convention. Rather than dismissing his opponents out of hand, Jay listened to their concerns and made a careful defense of the Constitution. Through patience and reasoned arguments, Jay and his Federalists won the day and made New York the 11th state to ratify the Constitution.


Given Jay’s outlook, it’s no surprise that when multiple offices in the new government were opened to him, Jay chose the office of First Chief Justice of the Supreme Court. Now, with the Constitution ratified, it would have to be implemented and interpreted. Jay followed close legal and textual reasoning in his decisions—even when they proved not to be popular.


Jay’s decisions continue to matter today, not least because the U.S. is still living with the Constitutional framework he worked to build. His career and writings demonstrated a commitment to the rule of law and to constitutional forms. Those structures allow for the pursuit of justice and the gradual amelioration of society through careful, sustained efforts. The course for lasting change is to defend the legal and constitutional order as a bulwark against anarchy and to reform moderately and prudently.