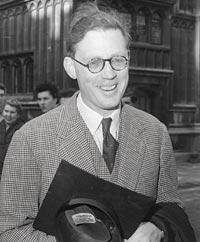 Hugh Trevor-Roper, Lord Dacre (1914-2003), is retired Regius Professor of Modern History at the University of Oxford. Among his works are The Last Days of Hitler, The Gentry, 1540-1640, The Rise of Christian Europe, The Plunder of the Arts in the Seventeenth Century, Princes and Artists: Patronage and Ideology at Four Hapsburg Courts, 1517?1633, and The Hermit of Peking.