Home / Titles / To Secure the Blessings of Liberty: Selected Writings

To Secure the Blessings of Liberty: Selected Writings 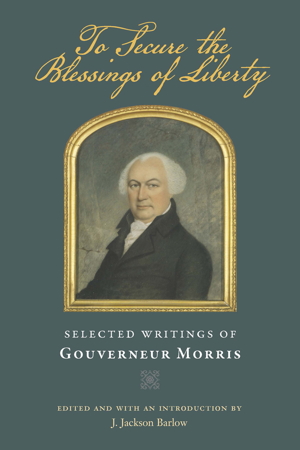 A single-volume collection of Gouverneur Morris’s writings. Morris served as Deputy Superintendent of Finance during the American Revolution, in which capacity he devised the system of decimal coinage. He was a prominent member of the Constitutional Convention, where he spoke more frequently than any other member and, as a member of the Committee on Style and Arrangement, put the Constitution in its present form and authored its Preamble. As a private citizen in Paris, and later Minister to France (1789–94), Morris was a firsthand witness of the French Revolution. On his return to the U.S., he served as a U.S. Senator, was a prime mover in the creation of the Erie Canal, and took a leading role as a critic of the Jefferson and Madison administrations. Providing his unique perspective, this is a wonderful and accessible single source that illuminates the political and economic thought of Gouverneur Morris.

To Secure the Blessings of Liberty: Selected Writings of Gouverneur Morris. Edited and with an Introduction by J. Jackson Barlow (Indianapolis: Liberty Fund, 2012).