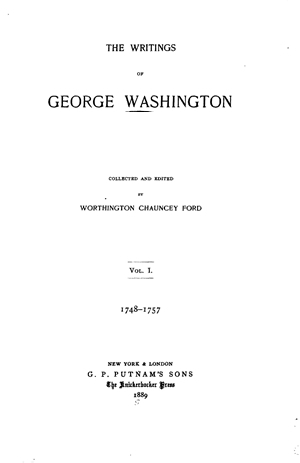 The Writings of George Washington, 14 vols.

A 14 volume collection of Washington’s writings.

“It is a valuable ingredient in the general estimate of our welfare, that the part of our country, which was lately the scene of disorder and insurrection, now enjoys the blessings of quiet and order. The misled have abandoned their errors, and pay the respect to our constitution and laws, which is due from good citizens to the public authorities of the society. These circumstances have induced me to pardon, generally, the offenders here referred to; and to extend forgiveness to those, who had been adjudged to capital punishment. For, though I shall always think it a sacred duty, to exercise with firmness and energy the constitutional powers with which I am vested, yet it appears to me no less consistent with the public good, than it is with my personal feelings, to mingle in the operations of government every degree of moderation and tenderness, which the national justice, dignity, and safety may permit. (FROM: SPEECH TO BOTH HOUSES OF CONGRESS, DECEMBER 8TH, 1795) - George Washington”