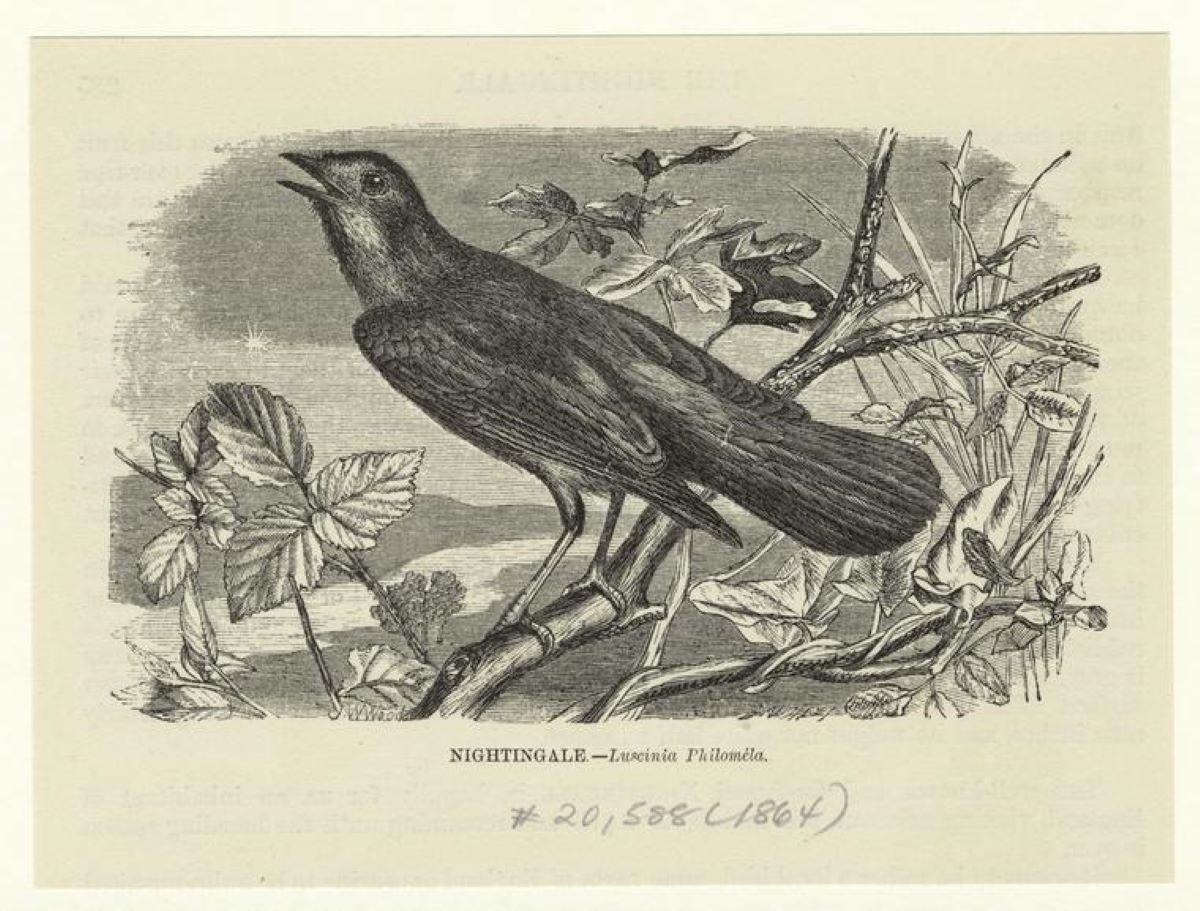 Recently, I was putting together a course on George Orwell's Animal Farm. Naturally, I got distracted and began researching the beast fables that provided Orwell with some of the background literary inspiration for his work. I had grown up with the fairy tales and beast fables collected by the Brothers Grimm. As I got older, I became familiar with the tales told by Aesop, and later beast fables created by Kipling and others.

New to me this time was a fable from Hesiod's Works and Days, a didactic poem with instructions for agricultural practices and for a moral life. Also inside Works and Days, however, is a series of fables, many with strong political implications. The Hawk and the Nightingale is one of these, and I read it as a rousing warning against the dangers of tyranny distilled into just a few concise lines. The translation of Hesiod here at the OLL tells the story:

Now will I tell a tale to princes who themselves are wise. Thus spake the hawk to the nightingale of speckled neck, as he bore her far aloft to the clouds in the clutch of his talons, while she, on his crooked talons impaled, made pitiful lament: unto her he spake masterfully: ‘Wretch! wherefore dost thou shriek? Lo! thou art held in the grasp of a stronger. There shalt thou go, even where I carry thee, for all thy minstrelsy. And as I will, I shall make my meal of thee, or let thee go. A fool is he who would contend with the stronger. He loseth the victory and suffereth anguish with his shame.’ So spake the swift-flying hawk, the long-winged bird. But do thou, Perses, hearken to justice, neither nurse insolence. Insolence is an ill thing for a poor man. Not even a good man may lightly bear it, but burdened by it chanceth upon doom. Better is it to pass by on the other side, to ensue justice. Justice in the end is better than insolence, and the fool learneth it by suffering.


A modern translation provides a tighter version of the tale:

This is how the hawk addressed the colorful-necked nightingale,
carrying her high up among the clouds, grasping her with its claws,
while she wept piteously, pierced by the curved claws;
he said to her forcefully,
"Silly bird, why are you crying out? One far superior to you is holding you.
You are going wherever I shall carry you, even if you are a singer;
I shall make you my dinner if I wish, or I shall let you go.
Stupid he who would wish to contend against those stronger than he is:
for he is deprived of the victory, and suffers pains in addition to his humiliations."


Hesiod's explanation of the tale--not quite so formal as an Aesopian moral, but still present--is that it provides a story to illustrate what a bad thing it is to be insolent. Both the nightingale's complaints at being caught by the hawk and the hawk's vaunting words could easily be read as insolence. And Hesiod wants us to know that insolence should always give place to justice. Our personal voices and complaints--whether we are nightingales or hawks--should always give way in the interests of justice. If we are wise, says Hesiod, we will learn this from him. Fools, however, will learn it by suffering.

But when I read this fable, I read it as a warning about tyrants. To me, Hesiod's hawk is giving voice to the tyrant's sense of ownership and control over his subject in much the same way that James I and VI does in his 1609 speech to Parliament:


It's too late for the nightingale, of course, but perhaps we, as Hesiod's readers, are meant to be not merely resigned to the invasions made by the powerful in our lives, but warned to keep an eye out overhead, before they swoop down upon us.