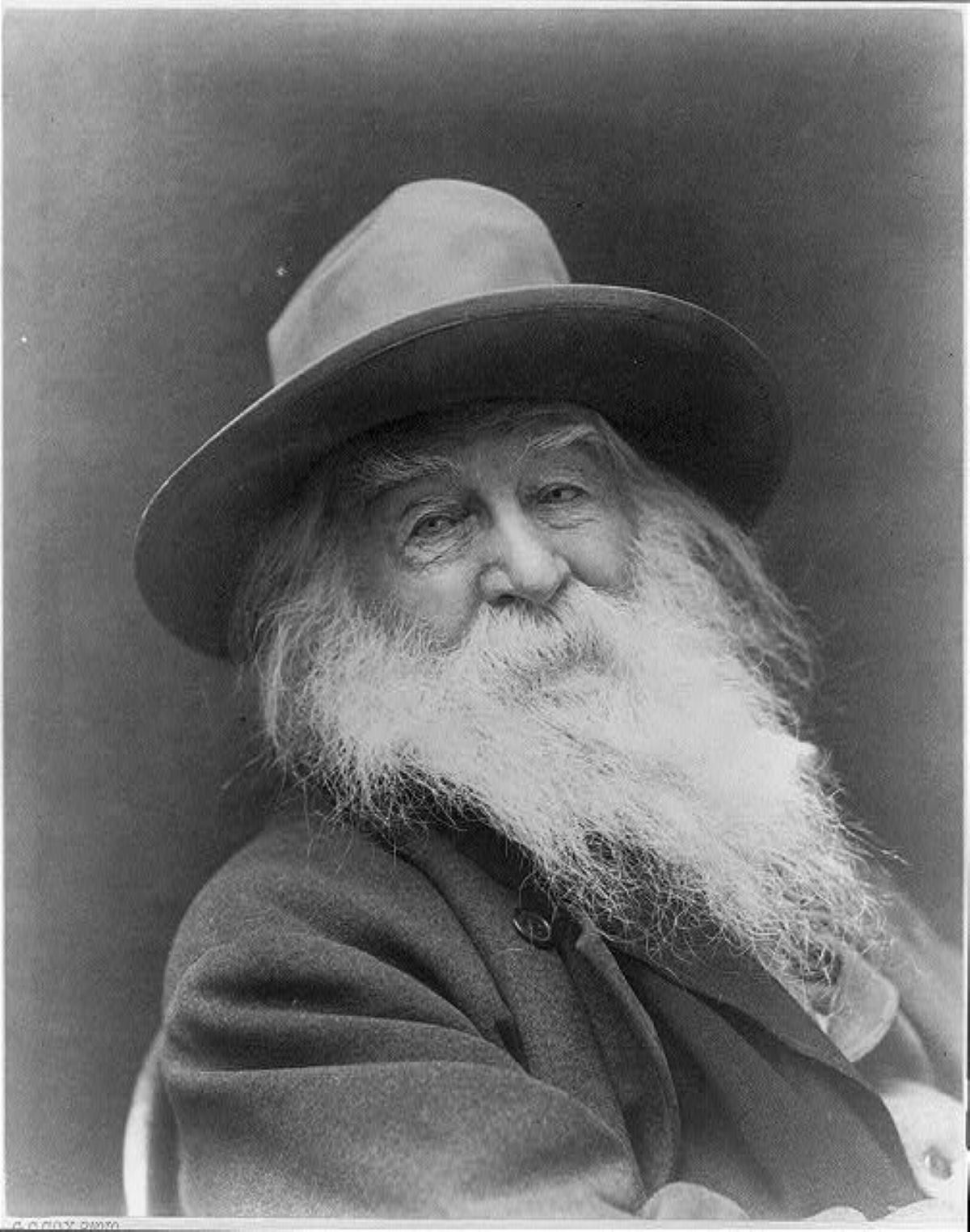 Walt Whitman (1819-1892) surely has won the popularity contest as “the greatest American poet” and other accolades beyond counting. The Poetry Foundation writes that “Walt Whitman is America’s world poet—a latter-day successor to Homer, Virgil, Dante, and Shakespeare.”
And yet, his theme is not political liberty, freedom, or individualism—although he refers to them. He is not the poetic scourge of despotic tyranny or mob rule. He rarely refers to any theory of government. Well, then, what of individualism? “I sing of myself…” But in the next line he seems to strike a note of almost metaphysical collectivism with “every atom belonging to me as good belongs to you.”

An American Paradox
To understand Whitman, it helps to return to ideas of the Founding Fathers. Not their official statements of political philosophy, but, instead their profound doubts, pessimism, and, yes, despair. Jefferson, John Adams, Alexander Hamilton, and even optimist Ben Franklin shared among themselves aching doubts and fears for the new republic, its constitution, and its citizens.
There is no one theme in these confessions of pessimism, but dominating them is the paradox, or dilemma, of encouraging unprecedented individual autonomy and personal liberty—and at the same time expecting dedication to the public good, the commonweal, and nation-building. How would the historically radical individualist perspective motivate those “public virtues”?
In 1776, John Adams wrote to Joseph Warren: "Public virtue cannot exist in a nation without private [virtue], and public virtue is the only foundation of republics. There must be a positive passion for the public good, the public interest…established in the minds of the people, or there can be no republican government, nor any real liberty: and this public passion must be superiour to all private passions."
A tall order in a new nation erected upon individual rights, jealous protection of individual autonomy from government, and personal liberty unprecedented in history. Admittedly, Adams was the pessimist of the era, but the sentiments that he expresses on this matter can be replicated almost without limit in the personal soul-searching statements of the Founding Fathers.
“But," noted biographer Andrew Burstine, "Jefferson [despite his pessimism] "believed in the benevolence and expansiveness by which he defined the American character. He never lost hope."
Walt Whitman, born on Long Island, residing most of his life in Brooklyn—an ardent supporter of the Civil War and Abraham Lincoln—published his poetry collection, Leaves of Grass, in 1855, at his own expense, and made his reputation as a poet.
“Song of Myself” Is about You
In the first poem of that collection, “Song of Myself,” he sounds the note that forever defines his significance in the American psyche: For all the multiplicity of lives of autonomous individuals that constitute the American experience, Whitman feels at one with them. The crowds in cities, the construction workers, the pioneers on vast prairies, the moccasined fur traders, the laboring slaves, the rich in their salons… His evocations in this long poem (52 sections, one for each week) are the living, breathing reality of the American motto: “E Pluribus Unum”—“from many, one.”
What could be a better image of American than his famous line:  “I am large, I contain multitudes”?  And those multitudes are made of individuals. It has been pointed out that the first word of “Song of Myself” is “I,” and the last word is “you.”
Whitman begins with the homeliest of images, “leaves of grass,” and, contemplating those blades, he “loafs”--like any boy in a front yard in a town on a summer’s day. And his contemplation takes him to the thought that nothing should divide those who have experienced America:

“I CELEBRATE myself, and sing myself,
And what I assume you shall assume,
For every atom belonging to me as good belongs to you.
I loaf and invite my soul,
I lean and loaf at my ease observing a spear of summer grass.
My tongue, every atom of my blood, formed from this soil, this air,
Born here of parents born here from parents the same, and their parents the same,
I, now thirty-seven years old in perfect health begin,
Hoping to cease not till death.
Creeds and schools in abeyance,
Retiring back a while, sufficed at what they are, but never forgotten,
I harbor for good or bad, I permit to speak at every hazard,
Nature without check with original energy.”

Is this, then, some nineteenth-century German concept of the “volk” and the “soil” that spawn a population sharing incommunicable collective national identity and superiority?  As it begins, with a certain cosmic scope, “Song of Myself” might suggest this. Although, even here, Whitman puts “creeds and schools” in “abeyance,” “retiring” them “a while.” They served their purpose and will live in the hearts of immigrants; but now it is time to move on.
As the poem unfolds, it is about no generality of nationality, ethnicity, or race. It is a poetic evocation of individuals and peoples across America, up and down the economic ladder, across occupations… A striking feature of this poem, lending it individuality, got Whitman in trouble. There is overt sensuality, the heaving breasts of men and women alike. He returns to this again and again:  “…you settled your head athwart my hips and gently turn’d over upon me, /And parted the shirt from my bosom-bone, and plunged your tongue to my bare-stript heart…”
In a still-frontier America, where men and women labored side by side, often sole companions, or coupled in makeshift boom towns of strangers, this frank erotic imagery makes the poem a peculiarly American epic. Not everyone appreciated it. The U.S. Government responded by firing Whitman from his job.
Embracing Individualism and Democracy
Leaves of Grass, including “Song of Myself,” is acclaimed America’s uniquely “democratic poem.” Fair enough as far as it goes. But those who view it as a hymn to “democracy” as opposed to the claims of individualism must ignore the text. “Song of myself” is an ode to individualism--an epic of individualism in America, where the diversity made possible by freedom surmounts divisions of “creeds and schools.”
“He sets out to expand the boundaries of the self to include, first, all fellow Americans, then the entire world, and ultimately the cosmos. When we comprehend just how vast the self can be, what can we do but celebrate it…”
This vast expansiveness is “poetic license,” a kind of symbolism, dramatizing Whitman’s message that we can retain our identity and integrity as an individual even as we expand our boundaries without limit--to identify with all Americans.
The theme can be stated prosaically: “Whitman is celebrating America and her diversity. Diversity is something that causes a great deal of concern among people. …Whitman celebrates the idea that we can have diversity in America and still remain our individual selves.”
He writes:


“These are really the thoughts of all men in all ages and lands, they are not original with me,
If they are not yours as much as mine, they are nothing, or next to nothing…”

Thus, Whitman expresses limitless optimism on the issue that tormented America’s founders: fear that individualism would preclude the “public virtue” of identifying our individual self-interest with that of the republic’s. He confidently writes that “what I assume you shall assume”—that is, assume that our common interest in our own individual rights, in freedom, is what above all unites us as Americans.
Making Up Our Minds
Has Whitman’s democratic individualism made a lasting impact on the American psyche? Betsy Erkkila, professor of literature at Northwestern University and co-editor of Breaking Bounds: Whitman and American Cultural Studies, affirms that and goes further::

“Whitman is the world’s poet of democracy…He used to be regarded as a spiritual or Emersonian poet with political ideas viewed as vague, possibly naïve, and even dangerous. Today, political philosophers and democracy theorists talk about his democratic vision. She refers to a stamp from an emerging African republic that bears Whitman’s image and comments that Whitman is on “everyone’s map.” “As countries move from authoritarian to democratic rule, you inevitably find his influence on their thinkers, poets and writers.”