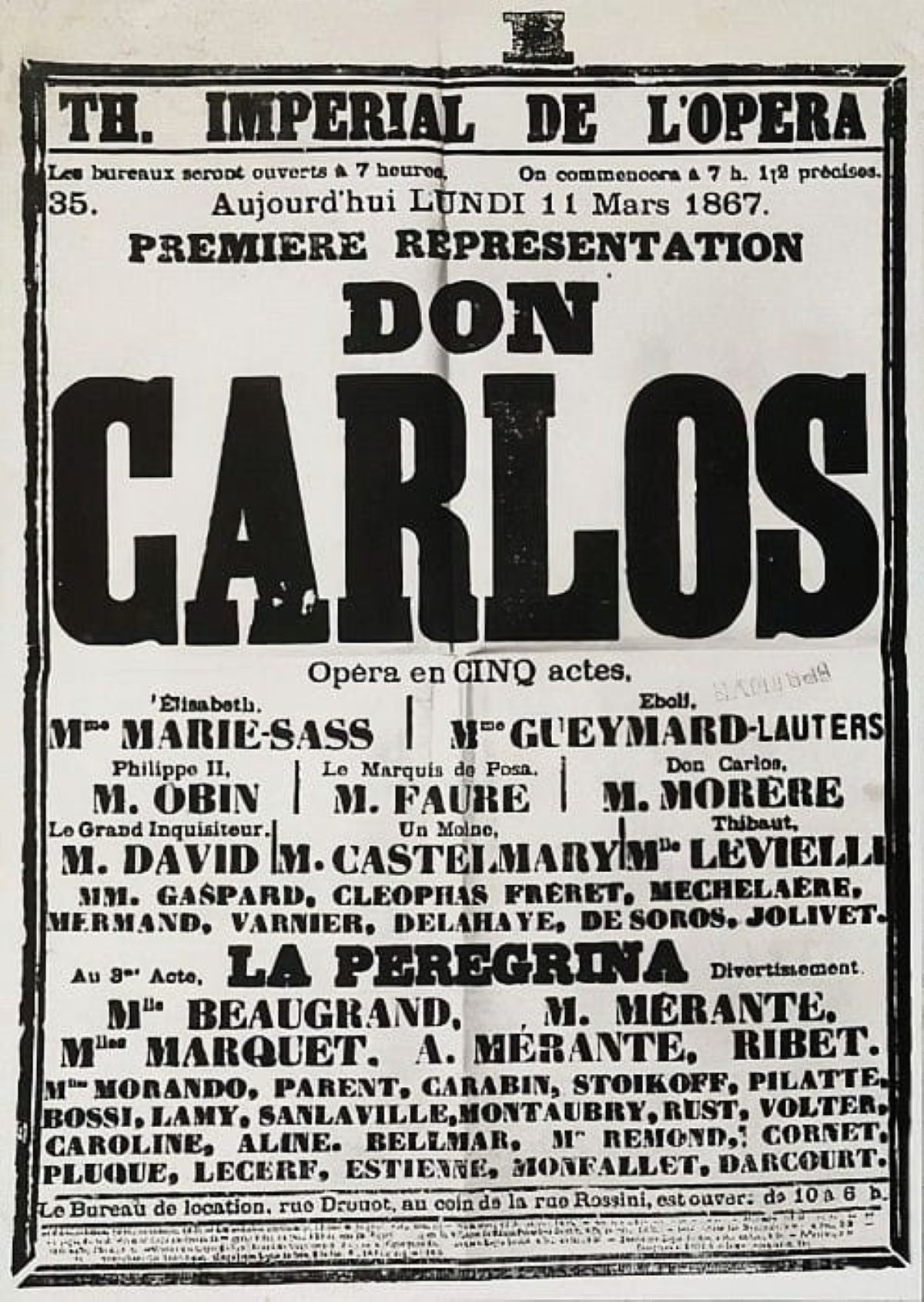 The Protestant Reformation threw 16th-century Europe into turmoil. Holy Roman Emperor Charles V, who was also the king of Spain, tried to maintain Catholic power in the face of religious schisms. Suffering from poor health and worn down by the conflicts, he abdicated from both thrones in 1556 and died soon afterward. His son Philip II of Spain took a firm line against Protestantism, which had taken root in the Spanish-held Low Countries

This history forms the background of Schiller’s play Don Carlos and Verdi’s opera which is derived from the play. Their history is broadly accurate, but the characters’ personalities and motivations differ significantly from their historical counterparts. The play and the opera focus on the struggle between oppression and liberty, between intolerance and tolerance. They reflect a liberal ideal which the sixteenth century didn’t yet know.


Don Carlo isn’t one of Verdi’s most popular operas. It’s very long, and there are huge differences among the multiple authorized versions in French and Italian. The story is complicated, and the ending is bewildering. Even the title is uncertain; should it be Don Carlo or Don Carlos? It deserves to be better known in spite of the difficulties, since it has masterful music and brings conflicting views of society into focus through its characters.


King Philip believes in peace through uniformity of belief. This means brutally suppressing any unrest in Flanders. His policy puts him into direct conflict with his son Don Carlo, who wants freedom for Flanders, through greater autonomy if not outright independence. His support of the Flemish cause leads to his being imprisoned and sentenced to death.


A major theme of the opera is the abuse of religious power. Verdi strongly opposed clergy holding secular power. We see similar themes in several of his operas, including I Lombardi and Aida. Philip is under the influence of the Grand Inquisitor, an old, blind man accompanied by sinister contrabassoon music. The Inquisitor urges Philip to sentence his son to death, comparing the action to God’s sacrificing his own Son. He even suggests that the king could be brought before the Inquisition for being contaminated with liberal ideas. After he leaves, the king soliloquizes that “the throne will always have to bow to the altar.”


The conflict between authoritarianism and freedom is dramatically shown in the “auto-da-fé” scene. It opens with the crowd singing extravagant praise to the king, followed by the arrival of emissaries from Flanders. They beg for clemency for their country, but the King sends them away. Don Carlo wants the power to administer Flanders and Brabant, but his father angrily refuses. To underscore his support for these lands, he draws his sword. Carlo’s friend Rodrigo persuades him to hand the sword over, and guards take him away. Then a group of “heretics” — in this context meaning Protestants — are brought to be burned. An angelic voice, heard only by them, declares that they will find peace in Heaven.


The ending is strange. The opera gives hints that a monk who appears in several scenes is actually Charles V, who somehow isn’t dead — or is the monk his ghost? At the very end, he saves Don Carlo from being executed, and all present recognize him as the supposedly deceased Holy Roman Emperor. The scene has inspired copious discussion. Perhaps we should take it to mean that no executioner could stop what Carlo started. The historical Carlos wasn’t executed but died in prison of uncertain causes.


It took many years for the Spanish territories in northern Europe to gain their independence. Spain didn’t officially recognize it until the end of the Thirty Years’ War, in 1648. The idea of religious freedom as a personal choice of belief was only starting to emerge. After the persecution of English Protestants under Queen Mary (who was married to Philip during her reign), Queen Elizabeth let both Catholics and Protestants practice their beliefs. In other places, Calvinist and Lutheran governments could be as intolerant of other Christian sects as Catholic rulers were.


Europe was taking its first uncertain steps toward real freedom of belief. That ideal made great progress over the centuries, and we should understand Verdi’s Don Carlo more as its expression in nineteenth-century terms than as a literally accurate presentation of how people thought during the Reformation. It’s a difficult opera but one which is worth attentive listening.