Reading Room / The Unimpeachable Politics of The Beggar's Opera

The Unimpeachable Politics of The Beggar's Opera 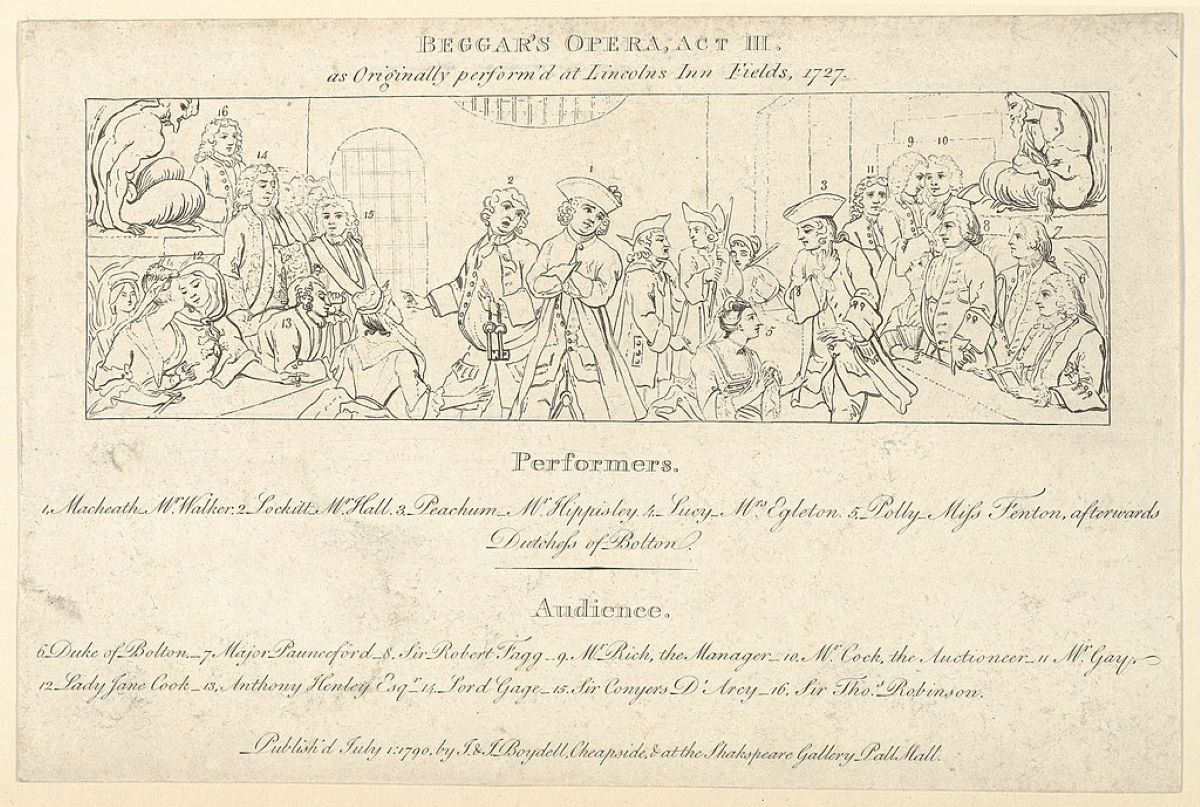 John Gay's The Beggar's Opera took London by storm in 1728, when it was staged 62 times in succession. It remains a classic for many reasons, starting with its humor. In the first act, Mrs. Peachum, upon hearing that her daughter has married the dashing highwayman "Captain" Macheath, exclaims, "Away, hussy! Hang your husband, and be dutiful."

Such lines pepper Gay's ballad opera, which has inspired not only peals of laughter but serious art, including William Hogarth's painting The Beggar's Opera, Bertolt Brecht's adaptation The Threepenny Opera (1928), and countless renditions of "Mack the Knife" (in honor of Polly's husband, Macheath). All of them satirize corruption at multiple levels of society.
In Gay's drama, Polly's father manages a gang of thieves who bring him stolen goods, which he "finds" for their owners for a small fee. When the thieves lose their dexterity or get sidetracked (e.g., wanting to become a tailor), Mr. Peachum "peaches" them for a reward. To protect his secrets, he plots to have Macheath executed.
Peachum's conscience, we learn, is clear: this is the way of the world. "A lawyer is an honest employment, so is mine," Peachum opines in his opening speech. "Like me too, he acts in a double capacity, both against rogues, and for 'em; for 'tis but fitting that we should protect and encourage cheats, since we live by them." The ballad opera continues to compare the high and the low, whether in class or profession or artistic form.
Most ludicrously, this ballad opera's "low" genre—naturalistic language and lyrics set to familiar melodies—contrasts with the "high" recitative and music of opera. For instance, Macheath sings a trio with his two wives before his scheduled hanging. When a jailer brings more women and children, Macheath sounds henpecked when he exclaims,  "What! four wives more! this is too much. Here, tell the sheriff's officers I am ready."


More significantly, the behavior of the "low" Peachum evokes the real criminal Jonathan Wild, "Thief-Catcher General," who gained fame and then infamy by protecting some criminals while turning others in for profit. He was executed in 1725. Yet Peachum simultaneously represents the "high" Robert Walpole, the notoriously corrupt first prime minister of Great Britain. For instance, Walpole allowed some politicians to be punished for the South Sea Bubble, while he protected others, thereby earning the nickname "Screenmaster-General."


Gay had particular reasons to resent Walpole and others connected to the scheme of the South Sea Company, since he lost a great deal of money in the Bubble of 1720. The scandal was so great that it inspired John Trenchard and Thomas Gordon to begin writing some of their most famous essays, Cato's Letters, which remain libertarian classics.


Throughout the ballad opera, Gay underscores such examples of corruption, particularly in Walpole and his brother-in-law, Lord Townshend. As Peachum tells the jailer, Lockit, "In one respect indeed our employment may be reckoned dishonest, because, like great statesmen, we encourage those who betray their friends." The point was not only general but prescient, since the relationship between Walpole and Townshend became acrimonious.


Their dialogue is followed by an air in which Lockit urges Peachum to be cautious,

Lest the courtiers offended should be:
If you mention vice or bribe,
'Tis so pat to all the tribe,
Each cries—That was levelled at me.

The editor of the Everyman edition observes that this song was encored during a performance that Robert Walpole attended, "and he responded by encoring it a second time," which delighted the audience. Later, however, Walpole prevented the performance of Gay's sequel, Polly, which was subsequently printed.
From the start, everyone understood the gist of The Beggar's Opera, especially as underscored by the conclusion. The supposed author—the Beggar—agrees when a Player insists that Macheath must gain a reprieve in order to please contemporary tastes. The Beggar says,
Through the whole piece you may observe such a similitude of manners in high and low life, that it is difficult to determine whether (in the fashionable vices) the fine gentlemen imitate the gentlemen of the road, or the gentlemen of the road the fine gentleman. Had the play remained as I at first intended, it would have carried a most excellent moral. 'Twould have shown that the lower sort of people have their vices in a degree as well as the rich: and that they are punished for them.
The Beggar's Opera remains one of the great works of drama because it speaks to a timeless issue with relentless, unimpeachable logic.  We may no longer have highwaymen robbing travelers on the heath, but we continue to debate how to achieve equal justice for all.