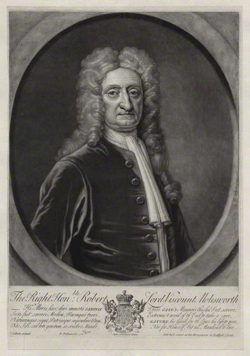 Robert Molesworth (1650-1725) was a staunch defender of the Glorious Revolution of 1689 and a consistent critic of political and religious corruption. After being proscribed by James II in 1689 he fled to England where he began a long career as a diplomat (including Denmark) and politician under William III and his successors, eventually being named Viscount of Swords in 1716.