52 Quotations about War and Peace 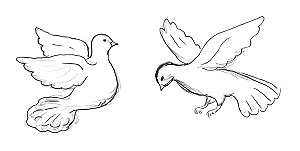 The issue of War & Peace has always been of great concern to us. In fact, the first five OLL quotes dealt with war, peace, and patriotism.

We list this collection of quotations about War & Peace below (in reverse chronological order) with links to the full quote so you can see what some of our authors have to say on the matter. We plan to compile these quotations into one file and make them available for download in PDF, ePub, and Kindle formats.

For further reading see the complete collection of 407 "Quotations about Liberty and Power".