Home / Titles / The Bhagvat-Geeta, or Dialogues of Kreeshna and Arjoon

The first English translation of part of the Indian sacred text the Mahabharata. It is better known today as the Bhagavad Gita. The Bhagavad gita, perhaps the greatest and most beautiful of the Hindu scriptures, is the fourth part of the Mahabharata. It is among the more recent parts of that work, dating from around the first or second century A.D. The Bhagavadgita is mainly in the form of a dialogue between the warrior Prince Arjuna and his friend Krishna (the earthly incarnation of the god Vishnu). The prince is engaged in a brutal but just war and contemplates throwing down his weapons and giving up his own life in order to avert more bloodshed. Krishna recalls Arjuna to his sense of responsibility and reminds him that he must discharge his duty as a warrior. 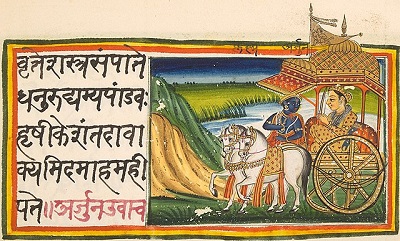 The Bhagvat-Geeta, or Dialogues of Kreeshna and Arjoon; in Eighteen Lectures; with Notes. Translated from the Original, in the Sanskreet, or Ancient Language of the Brahmans, by Charles Wilkins, Senior Merchant in the service of the Honorable The East India Company, on their Bengal Establishment (London: C. Nourse, 1785).