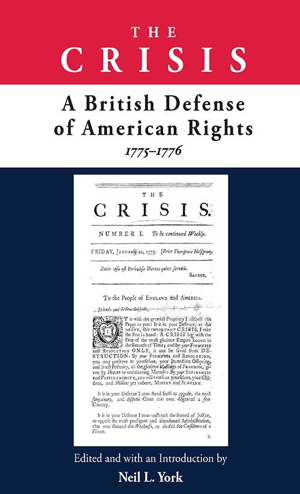 The Crisis was a London weekly published between January 1775 and October 1776. It was the longest-running weekly pamphlet series printed in the British Atlantic world during those years, and it used unusually bold, pithy language. Neither the longevity of the effort nor the colorful language employed would be reason enough to collect and print all ninety-two issues under one cover in a modern edition. The Crisis lays claim to our attention because of its place in the rise of freedom of the press, its self-conscious attempt to create a transatlantic community of protest, and its targeting of the king as the source of political problems—but without attacking the institution of monarchy itself.

The Crisis was condemned informally by leaders in the British government, and then formally in court, as a dangerous example of seditious libel. Copies of it were publicly burned, and yet publication continued uninterrupted. The men behind The Crisis were determined to interest the British public in American affairs and were no doubt pleased when various issues were reprinted in the colonies. They played on shared beliefs and shared fears: beliefs in the existence of fundamental rights, rights beyond the reach of any government, and the fear that loss of those rights in Britain’s American colonies could lead to their loss in Britain itself. They denounced George III in language at once harsh and florid, and did so many months before Thomas Paine’s Common Sense. Even so, The Crisis did not call on Britons to overthrow monarchy with a republic, and its ardor for the Patriot cause cooled once Revolutionary Americans declared their independence. It stands as proof that strident rhetoric does not necessarily lead to radical political action. Its history also shows that ideas, once unleashed, take on a life of their own.

We have prepared a more detailed ToC for York’s The Crisis which includes the date, the author’s name, and the topic:

The Crisis: A British Defense of American Rights, 1775–1776. Edited and with an Introduction by Neil L. York (Indianapolis: Liberty Fund, 2016).