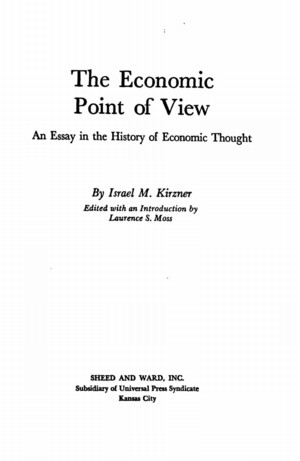 Thinking like an economist has been a point of pride since Adam Smith. What often seems to be an endless muddle of political and social perspectives, pseudo-scientific analysis, journalistic advocacies, and financial matters from daily household concerns to the stock market, is suddenly illuminated once one discovers the economic point of view. Kirzner’s The Economic Point of View is a thoughtful study of how and why economists are successful at sorting out certain issues but less successful at others, issues from welfare to wealth to human actions. Ludwig von Mises, for whom Kirzner once worked as a graduate assistant, wrote the Foreword to the first edition.

Read the Liberty Classic on this title from Econlib.

The Economic Point of View: An Essay in the History of Economic Thought, ed. with an Introduction by Laurence S. Moss (Kansas City: Sheed Andrews McMeel, 1976).