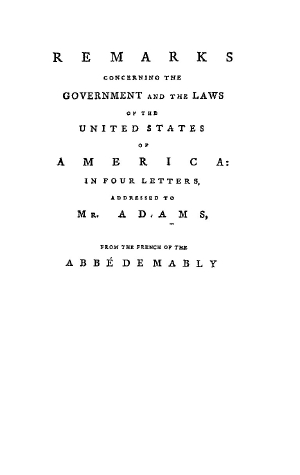 John Adams got to know Mably when he was in Paris in the early 1780s. Mably wrote a noted history of France and was keen to write a book on the American Revolution. He spoke about this to Adams who encouraged the project. In his Defence of the Constitutions Adams noted that Turgot, Price, and Mably had all written important critiques of the US Constitution to which Adams replied in that work.

Remarks concerning the Government and Laws of the United States of America: in Four Letters addressed to Mr. Adams, with Notes by the Translator (Dublin: Moncrieffe, 1785).