Home / Titles / The Parallel Bible. Old and New Testaments (KJV and Revised Version) / The Gospel According to S. Luke (KJV)

The Gospel According to S. Luke (KJV) 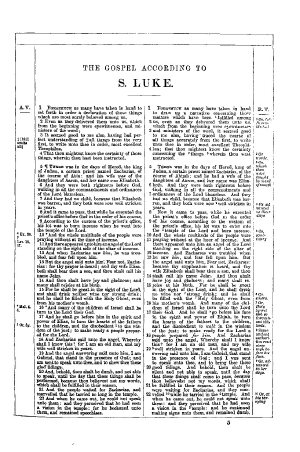 The Third Gospel of the New Testament. A parallel version with the King James Version in one column and the revised Version in another column. In Luke’s writings he was careful to stress the universality of the Christian faith, saying “that repentance and forgiveness of sins should be preached in his name to all nations” (Luke 24:47). Luke was also, perhaps, the first to connect Roman history and the Roman Empire with Christianity. He held the Jews responsible for Christ’s death, not the Romans (the Book of Luke notes on three occasions that Pilate did not find Jesus guilty).

The Parallel Bible. The Holy Bible containing the Old and New Testaments translated out of the Original Tongues: being the Authorised Version arranged in parallel columns with the Revised Version (Oxford University Press, 1885). The Gospel according to S. Luke.