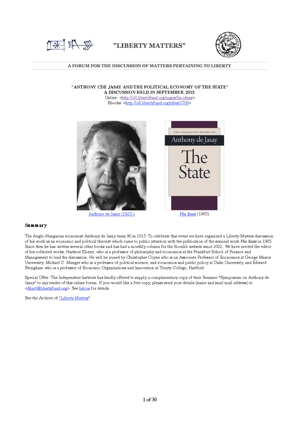 Liberty Matters: Anthony de Jasay and the Political Economy of the State (Sept. 2015)

The Anglo-Hungarian economist Anthony de Jasay turns 90 in 2015. To celebrate this event we have organized a Liberty Matters discussion of his work as an economic and political theorist which came to public attention with the publication of the seminal work The State in 1985. Since then he has written several other books and has had a monthly column for the Econlib website since 2002. We have invited the editor of his collected works, Hartmut Kliemt, who is a professor of philosophy and economics at the Frankfurt School of Finance and Management to lead the discussion. He will be joined by Christopher Coyne who is an Associate Professor of Economics at George Mason University, Michael C. Munger who is a professor of political science, and economics and public policy at Duke University, and Edward Stringham who is a professor of Economic Organizations and Innovation at Trinity College, Hartford.