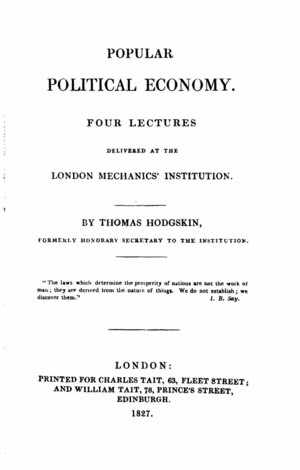 Thomas Hodgskin, an officer in the British Navy who left and subsequently worked for The Economist, was one of the earliest popularizers of economics for audiences of non-economists. He gave lectures on free trade, the corn laws, and labor to “mechanics institutes” (which we might now call adult education groups) even before Jane Haldimand Marcet wrote pamphlets for similar groups. Hodgskin passionately cared about the concerns of laborers after his experience with the maltreatment of sailors. His discussions of the labor theory of value followed up on David Ricardo and pre-dated John Stuart Mill’s expositions on similar themes.