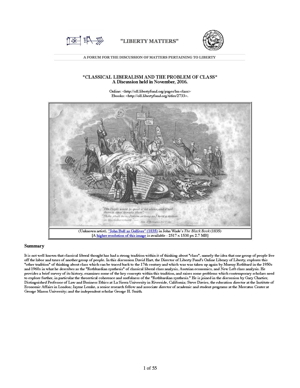 This online discussion is part of the series “Liberty Matters: A Forum for the Discussion of Matters pertaining to Liberty.” It is not well known that classical liberal thought has had a strong tradition within it of thinking about “class”, namely the idea that one group of people live off the labor and taxes of another group of people. In this discussion David Hart, the Director of Liberty Fund’s Online Library of Liberty, explores this “other tradition” of thinking about class which can be traced back to the 17th century and which was was taken up again by Murray Rothbard in the 1950s and 1960s in what he describes as the “Rothbardian synthesis” of classical liberal class analysis, Austrian economics, and New Left class analysis. He provides a brief survey of its history, examines some of the key concepts within this tradition, and raises some problems which contemporary scholars need to explore further, in particular the theoretical coherence and usefulness of the “Rothbardian synthesis.” He is joined in the discussion by Gary Chartier, Distinguished Professor of Law and Business Ethics at La Sierra University in Riverside, California; Steve Davies, the education director at the Institute of Economic Affairs in London; Jayme Lemke, a senior research fellow and associate director of academic and student programs at the Mercatus Center at George Mason University; and the independent scholar George H. Smith.