From the Publishing Department: Smyth Sewing 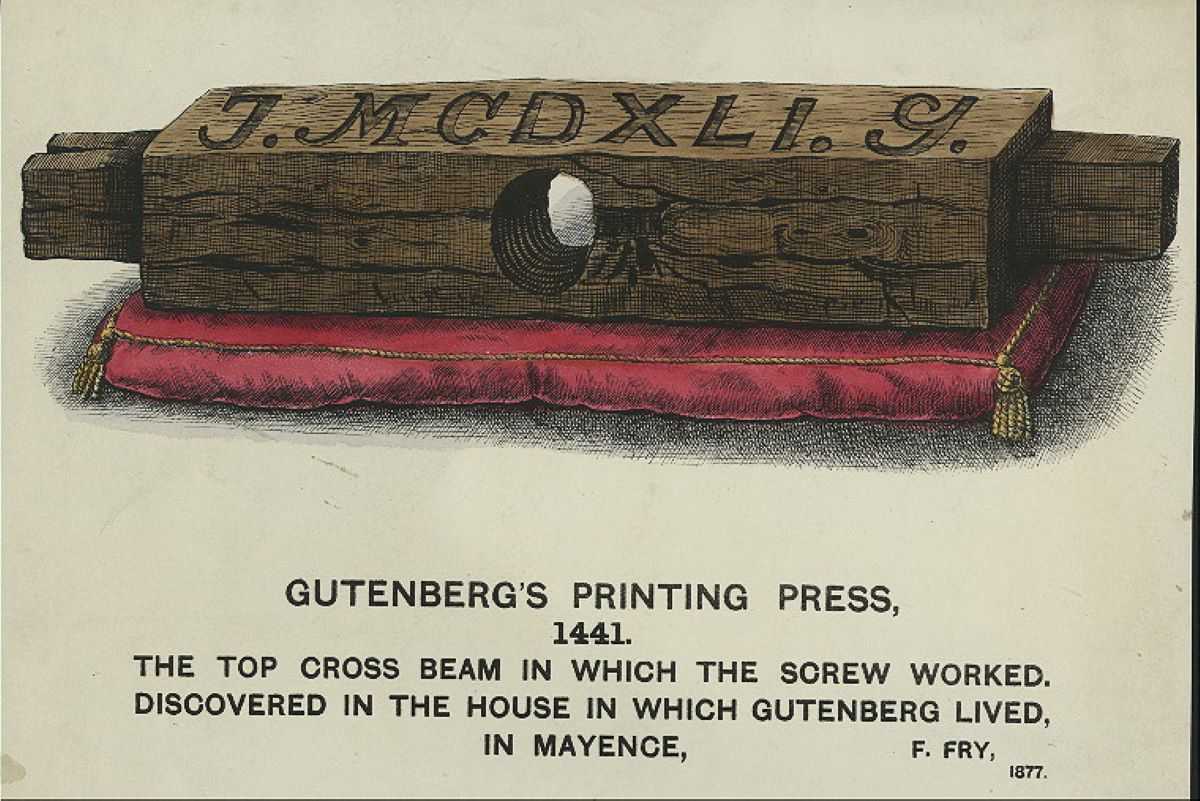 “Of making many books there is no end,” said Ecclesiastes, but there have long been limits placed on their number by technology. The earliest books were scrolls, sheets of papyrus, vellum, or parchment glued together into a long single strip and rolled into cylinders, one at a time. In the first century of the common era, the Roman poet Martial extolled the virtues of the codex, in which pages were bound together along one edge, essentially the form of the modern book. Paper was first invented in China in the second century BCE, and the technology spread to the Islamic world in the eighth century CE. Muslims brought papermaking to Europe during the eleventh century. Vellum and parchment continued to be used for important documents for centuries to come, but its relative cheapness gave paper a strong advantage for most works.

For centuries in the Western world books were almost all produced one at a time, aside from a few examples in which each page was carved in reverse from a single block of wood, which was inked and pressed into the paper or parchment. In the mid-fifteenth century, Johannes Gutenberg invented moveable type, in which each letter, number, punctuation mark, or space was cast in a lead-tin alloy, using an adjustable mold, permitting all the types to be the same height and depth yet wider (m, w) or narrower (i, r, t) as needed. The separate types were locked into a frame, mounted in a converted wine or olive-oil press, inked, and pressed against the paper to print a page. When enough pages had been printed for an edition, the page of type would be broken up and the type redistributed for use in other pages. Gutenberg and his successors printed pages in signatures, or fascicles—bundles of four, eight, twelve, or sixteen pages—which were sewn together and then assembled in correct order and sewn into complete book blocks. Aside from relatively minor improvements in techniques and materials, and disregarding the explosion of available typefaces and styles, Gutenberg's invention remained in place for well over three centuries, but by the end of the eighteenth century, the demand for books and other printed materials inspired inventors to come up with ways to increase production.
Wear on metal type from printing many pages led to the invention of the stereotype in the late eighteenth century. The typeset page with the individual characters locked in place was used as a matrix to make an impression in a papier-maché mold, which was then used to cast several solid (stere) metal sheets, from which the page was printed in the press. When a metal sheet was worn out, it was replaced with another.
Rotary-press technology was introduced in the 1780s but not perfected until the 1840s, permitting printing from rolls of paper rather than precut sheets, to produce books and other printed matter in far greater quantities at far higher speeds with no great sacrifice in quality.
Ottmar Mergenthaler (1854–1899) patented the first successful machine for casting complete lines of type, the Linotype, in 1884, replacing hand-set type, one character—letter, number, punctuation mark, or space—at a time. The lines of type were easily assembled into pages, and the depth of pages could readily be adjusted by moving lines of type from one to the other. This was the first real transformation of typesetting, or composition, in four centuries.
Press improvements allowed signatures to be assembled conveniently, but it was customary for readers to buy books unbound, since the sewing of the signatures and their assembly into book blocks was still time-consuming, labor-intensive handwork. David McConnell Smyth (1833–1907) patented his first (unsuccessful) book-sewing machine in 1868, an improved version in 1879 (first used at the Riverside Press in Cambridge, Massachusetts, in 1880), and finally the Improved No. 3 in 1886, which effectively eliminated the last major bottleneck from book production. With Smyth's invention, books could be sewn together efficiently and permanently. (Incidentally, the term is universally pronounced to rhyme with “blythe” rather than with “with,” although there is no evidence that Smyth pronounced his name differently from Smith.)
Whereas phototypesetting superseded the Linotype in the 1980s, only to be itself made obsolete by inexpensive so-called desktop publishing (i.e. desktop typesetting or composition), and offset printing has almost entirely replaced letterpress, Smyth-sewing continues into the twenty-first century to be used for books that are meant to last. There are many other kinds of binding, such as perfect binding, first used for cheap paperbacks but now for long-lasting hardcovers and paperbacks too, in which the folded part of the pages is ground perfectly flat and glued to the cover; notch binding, which cuts notches into the book block for additional glue; saddle-stitching, essentially stapled signatures for short works; and others. Only Smyth-sewing permits the book block to be bound in a secure, strong, permanent manner, so that the book can be opened and laid flat, without weakening the binding in the least. So long as bound books exist, Smyth-sewing will be used to bind the pages into signatures and the signatures into a permanent whole book.

Dan Kirklin served as the Managing Editor of Liberty Fund books for more than twenty years.