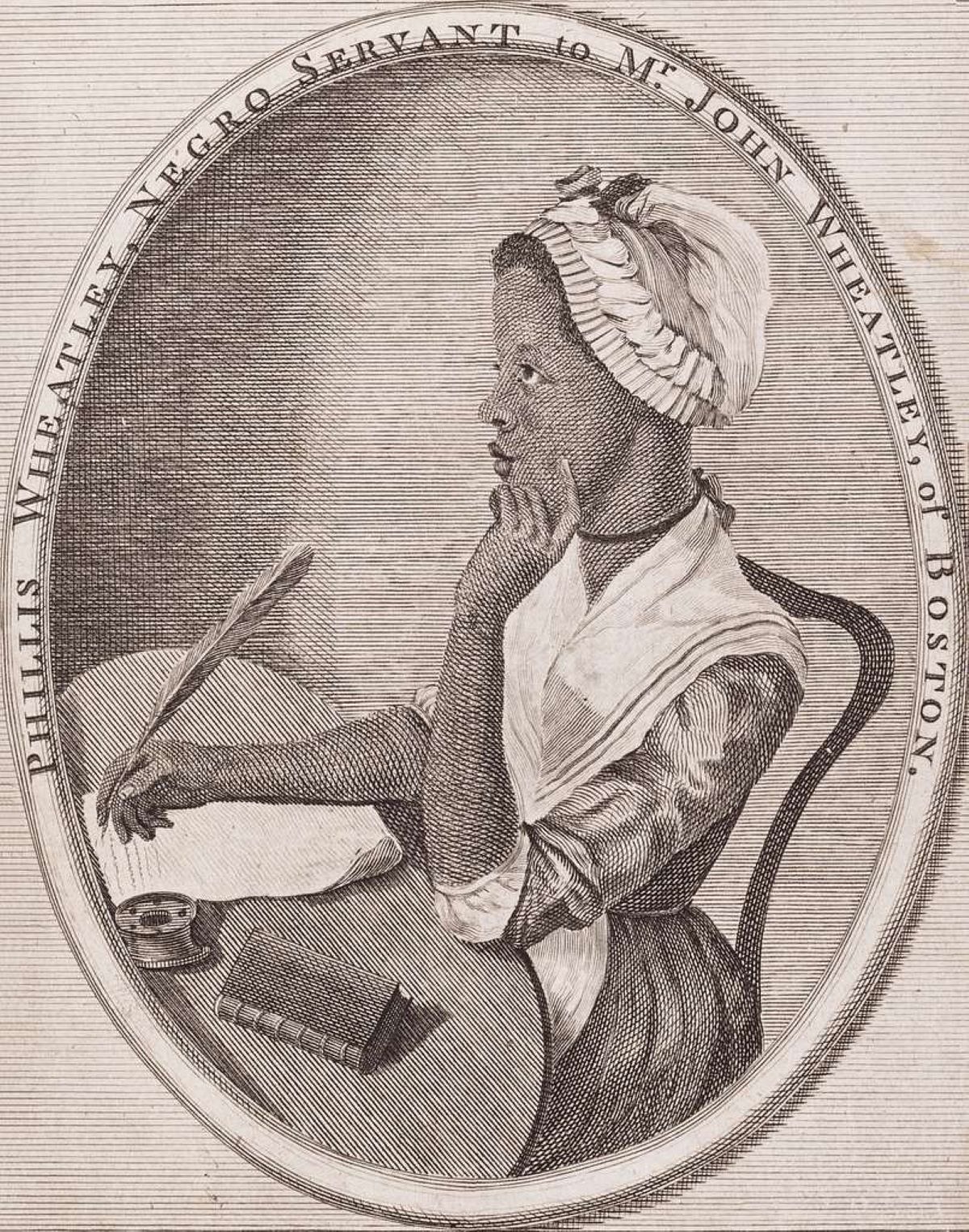 Being first holds a significant place in American culture, for Americans love being Number One, being winners, being the First. For African Americans, being a first has a somewhat different meaning – it signifies another barrier having fallen. It signifies that above all odds, another one has made it! But always accompanying the “first” were counter-pronouncements – that this is an exception; that this person received special privileges; that this only happened because of affirmative action; that this person cheated to get here. Still, the record, in the end, speaks for itself, and the first stands.

Seemingly out of nowhere on December 21, 1767, a young Negro slave girl in Massachusetts published poetry on a level that any educated Englishman could appreciate. Phillis Wheatley became the first published female poet of African descent in the English colonies. Her story is an extraordinary one – both triumphant and tragic.
Wheatley wrote during the revolutionary period in North America. She lived through the creation of a new nation and was known by many of the men who brought it into being. In many ways, she represented the problematic situation that the new nation would face from 1776 to the present – the problem of the incredulity that black Americans would face.
She was born around 1753 or 1754 on the west coast of Africa. At the age of seven or eight (this too an estimation), she was sold to a slaver and taken across the Atlantic on a ship named Phillis and, after surviving the middle passage of the slave trade, was sold in Boston, Massachusetts, on July 11, 1761, to the Wheatleys, John and Susanna, to become their domestic slave. Their daughter, Mary, taught Phillis to read and write and schooled Phillis in the classics alluded to in so much of her poetry. It became evident to the Wheatleys that they had a prodigy on their hands – a girl from Africa who mastered the English language in only 16 months, and who produced sophisticated poetry, which was eventually published in newspapers in London and in Massachusetts. Wheatley's poetry was very much in the style of Alexander Pope, John Milton, and others who had been the subjects of the lessons she learned.
Her first book of poems was published in London, Poems on Various Subjects, Religious and Moral, in 1773, but only after such prominent men as John Hancock and Thomas Hutchinson met with her and testified to her authenticity. Phillis traveled to London with the Wheatley’s son, Nathaniel, and upon her return, she was freed by the Wheatleys on October 18, 1773. Eventually destitute, Phillis Wheatley married John Peters, a free black man, in April 1778, and they had three children. Phillis Wheatley Peters worked as a domestic to support herself and her children before she died on December 5, 1784, at the age of 31.
Phillis Wheatley was deeply religious, as noted in her poem, “On being brought from AFRICA to AMERICA”:

Twas mercy brought me from my Pagan land,
Taught my benighted soul to understand
That there's a God, that there's a Saviour too:
Once I redemption neither sought nor knew.
Some view our sable race with scornful eye,
"Their colour is a diabolic dye."
Remember, Christians, Negroes, black as Cain,
May be refin'd, and join th' angelic train.

Much of what we know about the views of Phillis Wheatley comes not from her poetry but from the letters that she wrote as she lived through the revolutionary period in American history. Although the people who owned her and subsequently freed her were loyal to England, Phillis supported the American patriots. Her correspondence also reveals her support for the end of slavery. She saw political and religious freedom as inextricably bound. In an unpublished poem signed Phillis Peters written in 1784, she celebrates the end of the Revolutionary War with the opening phrase, “LO! Freedom comes,” and goes on to recount the nature of war and the peace finally achieved.
Debates about this woman and her work existed from the beginning, not the least of which was the feeble dismissal of her talent by none other than Thomas Jefferson and the promotion of her work by abolitionists, who argued that people from Africa were just as capable of accomplishment as Europeans. By her very existence, Phillis Wheatley subverted the stereotype of Africans, and because she lived during the revolutionary period in America, her story adds dimension to the history of Africans in America. She is a literary bridge between that past and this present, an early example of the African American quest for freedom – a quest that predates the nation itself.