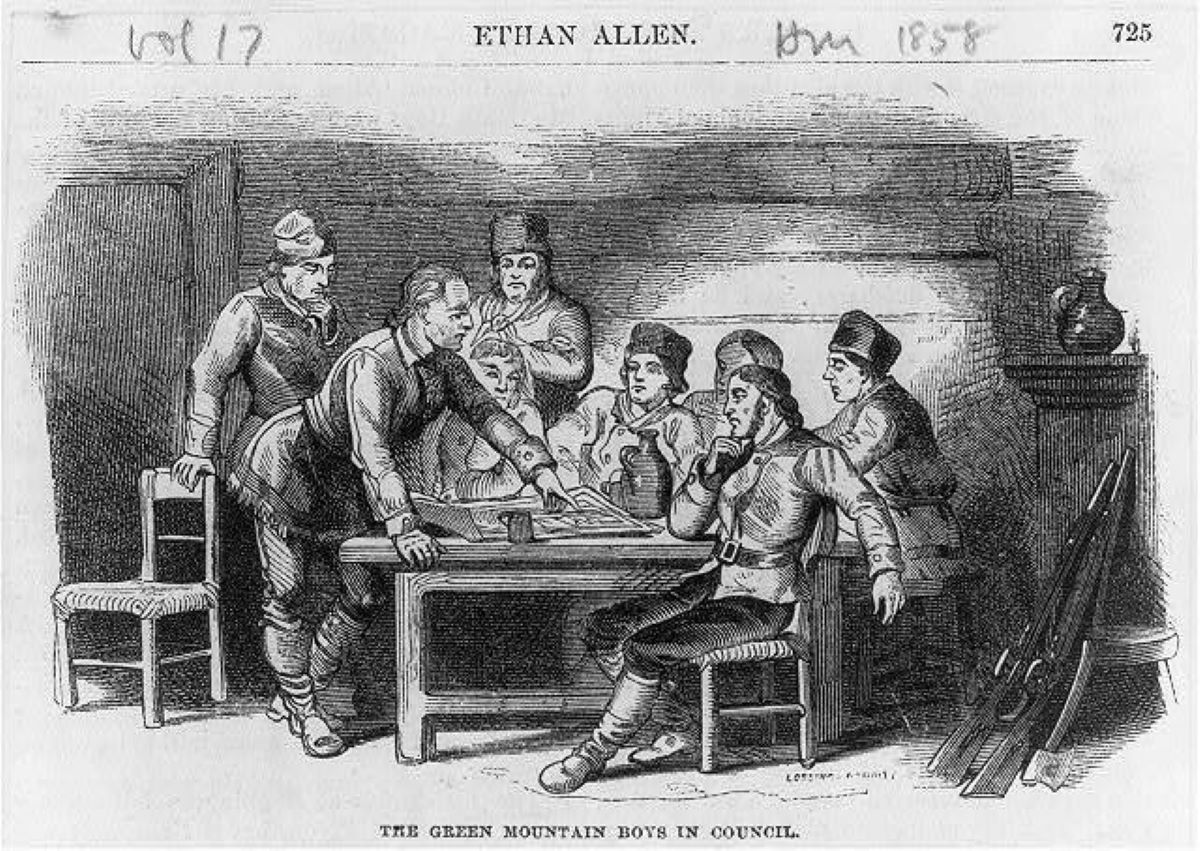 In many ways, Ethan Allen is the quintessential Yankee. A farmer, he speculated in land and involved himself in colonial politics regarding land.  He plunged into the War of Independence and became its first hero. Captured by the British and enduring years of severe imprisonment, when released he rushed to join Washington at Valley Forge. And he later fought to make Vermont a state.

Allen also took religion seriously, accepting nothing as a matter of course, and that led him into philosophy—and ultimately into controversies that shook theology in Boston, Concord, and beyond. Like many men of his era, he had little formal education, but early in life caught the fever of Enlightenment ideas. Today, mention of Ethan Allan frequently includes his book, Reason: The Only Oracle of Man (the shortened title). The book did not sell well. But it brought withering criticism from defenders of Christianity. (His book on his exploits in the Revolutionary War, including his captivity, was far more popular.)
Born in the Connecticut Colony in 1737, Allen was raised in a well-to-do farming family. His parents, descended from English Puritans, sought out greater freedom even than was available in Connecticut, moving to the frontier region around Cornwall. It was the Great Awakening, and Allen was not unaffected. He came to excel at quoting the Bible and disputing its passages.
Next came study with a minister, Thomas Young, to prepare for admission to Yale College. The relationship, which introduced Allen to Enlightenment thinkers such as John Locke, deepened into collaboration on a book that only decades later Allen completed and entitled: Reason: The Only Oracle of Man, a militant tract advocating deism and attacking Christianity as superstition. (The project abruptly went on “hold” when Young left town.)
His father’s death ended Allen’s plan to attend Yale and he married and settled down to farming. He did volunteer in 1757 for the Connecticut Militia at the beginning of the French and Indian War, but after an abortive march to lift the French siege of Fort William Henry, Allen ended his military involvement in that war.
Allen’s involvement with American colonial politics began in the late 1760s with purchases of land under the New Hampshire Grants program. The land became embroiled in New York politics, with active interference by Governor William Tryon of New York. King George took New York’s side. In response, Allen-the-militant stepped onto the American scene. He organized the famous militia, the “Green Mountain Boys,” and led them against New York settlers in the Grants. The tactics were rough, and Tryon responded by putting a price on Allen’s head. Militancy grew with Tryon enacting a law providing the death penalty for interfering with any magistrate.

The only thing that averted escalation was the outbreak of war. In typical fashion, Allen’s total attention turned in that direction. He heard from Connecticut militia friends after the battles of Lexington and Concord. Their plans were to capture British Fort Ticonderoga. In a few days, the Green Mountain boys and men from Connecticut and Massachusetts had elected Allen to lead a predawn raid on the fort. It was typical Ethan Allen initiative.
The day before the attack, Benedict Arnold showed up with a commission from Massachusetts for command of the expedition. Allen’s men refused to acknowledge the credentials. In this case, Allen compromised and he and Arnold both led the troops.
Before dawn on May 10, 1775, the crossing of Lake Champlain began. But fewer than 100 militiamen had crossed when approaching dawn impelled Allen to attack the still sleeping garrison. Silencing a single sentry, Allen stormed the commander’s quarters. Captain William Delaplace asked by what right Allen had entered and Allen roared: “In the name of the Great Jehovah and the Continental Congress.” The commander and fort surrendered without a shot and Allen became the hero of Fort Ticonderoga. It was far from irrelevant, creating a garrison against invasion of the British from the north and enabling artillery seized there to be shipped to Boston for use under John Knox.
Allen turned to a plan to raid Fort St. John with just 100 Green Mountain Boys (Arnold had departed on another raid). Allen’s boats met those of Arnold on the way; Arnold sought to dissuade him from attack. Allen persisted until near the fort he learned that 200 British regulars were approaching and broke off the raid to return to Ticonderoga.
He immediately proposed that with 1,500 men and artillery he could take Montreal. On June 22, he and his co-leaders appeared before Congress in Philadelphia, making the case for including the Green Mountain Boys in the Continental Army. It was arranged and straightaway Allen launched an invasion of Quebec. The campaign went well, with Allen raising support among Quebec’s inhabitants and Indians. Then, by night, Allen crossed the St. Lawrence River with his force, but planned reinforcements failed to arrive and British General Carleton had been alerted to the attack.
At the Battle of Longue-Pointe, Allen and 30 men were captured. That effectively ended Allen’s participation in the revolution until 1778. Most that is known about Ethan’s Allen’s captivity comes from his best-selling book. He was the war’s most famous prisoner, and King George feared his treatment would shape treatment of British prisoners by the Americans.
Nevertheless, Allen was imprisoned, often in chains and in solitary confinement, in the holds of British ships, and briefly in a British prison. Reportedly, his treatment was poor. He  managed to get a letter to the Continental Congress, describing conditions and urging Congress to treat British prisoners the same way. Again, it was typical of Allen, who reportedly remained feisty throughout his imprisonment (later George Washington sent a note to Congress declaring himself impressed with Allen’s high spirits after three years’ captivity).
Instead of tit for tat, King George directed that Allen and his men be taken back to America and treated as prisoners of war (not rebels and outlaws). The ship arrived first in Ireland, where Allen was hailed as a hero, and then in America, where Allen spent another year on a prison ship off the American coast.
Freedom came at last when a prisoner exchange traded Allen for Colonel Archibald Campbell, a deal arranged by an appointee of General Washington. Allen reported immediately to Valley Forge, where he was breveted a colonel as a “reward of his fortitude, firmness and zeal in the cause of his country, manifested during his long and cruel captivity…”  He received a salary of $75 a month although had no official, active role until called—and he never was called.
Allen returned to the “New Hampshire Grants,” which had declared independence in 1777, and resumed political activity—including resistance to New York. He also lobbied Congress as early as September 1778 to recognize Vermont as an independent state. When Congress hesitated, Allen joined controversial negotiations with the British for Vermont to become a British province.  It was typical Ethan Allen. As he later would be called the worst names for deism, he was called “treasonous” for the negotiations though no charges were laid. The United States, under the Articles of Confederation, would not act with respect to Vermont. Allen’s role as agitator ceased to be relevant and his role in Vermont affairs declined.
Ethan Allan died of a stroke on February 12, 1789, at age 52 on his Winooski River homestead in Burlington, Vermont. Today, the Ethan Allen homestead is a historic site located in the Winooski Valley Park District.