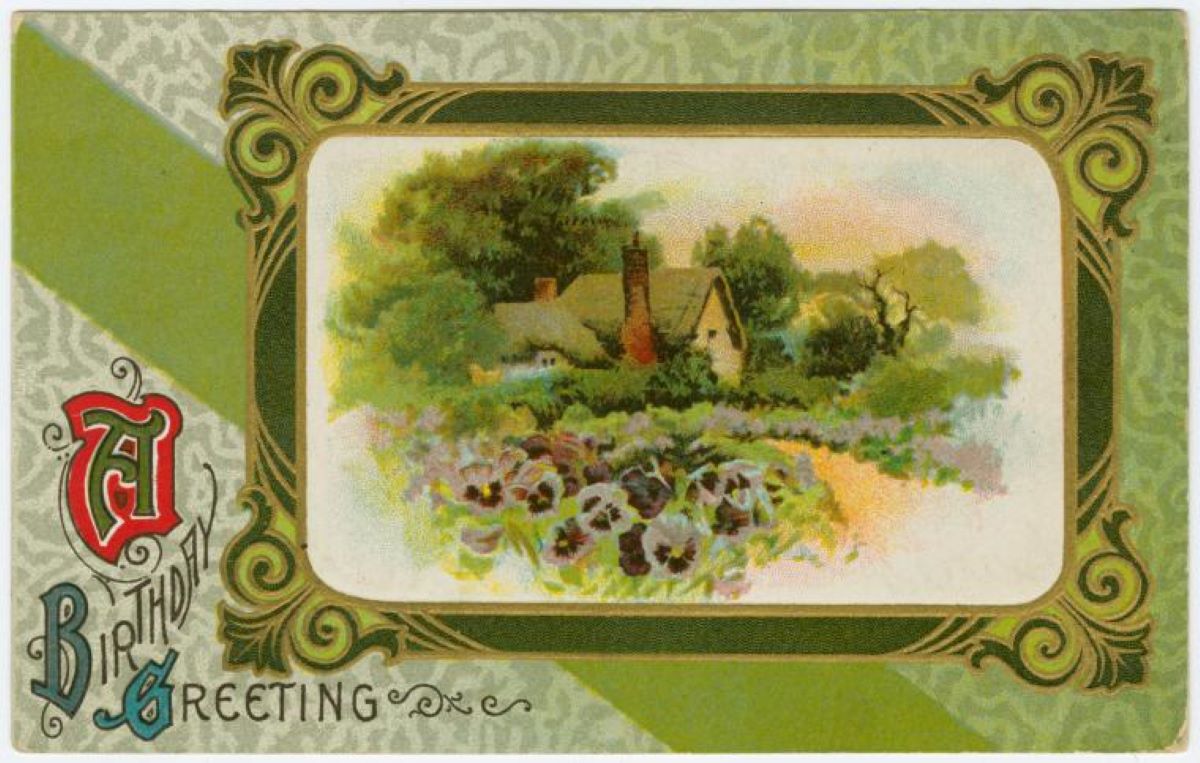 August’s featured birthday is Johann Wolfgang von Goethe.  A true polymath, he was a playwright, poet, novelist, scientist, and statesman who had an impact in all of those fields and emerged as probably the most influential writer in the German-speaking world.

Goethe was born in the Free Imperial City of Frankfurt am Main, in what is today the German state of Hesse.  His father, Johann Caspar Goethe (1710-1782) the son of a wealthy inn-keeper, had some minor administrative posts, but provided for his family mainly out of his inherited fortune.  His mother, Catherine Elisabeth Textor (1731-1808) was the daughter of one the most important officials of the city.  Johann Wolfgang was the eldest of seven children, but only one of his siblings reached adulthood, his sister Cornelia (1750-1777) with whom he was very close.  Both he and his sister received a good education from their parents and private tutors, after which Goethe (following his father’s wishes) went to study Law at the University of Leipzig in 1765 (where he had the first of numerous love affairs) but dropped out in 1768.  In 1770, at his father’s urging, he went back to school, this time to the University of Strasbourg where he succeeded in earning a law degree in 1771.  While there, he happened to meet the philosopher Johann Gottfried Herder (1744 – 1803).  Herder was in the process of developing his ideas about national culture, and his long conversations with Goethe made a profound impression on him.  Also in Strasbourg he fell in love again, with the daughter of a village pastor.  But, beginning a life-long pattern, his fear of commitment led him to abruptly break-off the relationship and he returned again to Frankfurt.


For the next few years Goethe practiced law, and in 1772 he secured a position on the Supreme Court of the Holy Roman Empire at Wetzlar.  But his main interests were still literary.  Under the spell of Herder’s ideas he soon emerged as a leading figure in a literary movement called Sturm und Drang.  It embodied a vague political liberalism and an embryonic German nationalism, and was a precursor to Romanticism.


While in Wetzlar, Goethe had another love affair that was to change his life.  He fell in love with Charlotte “Lotte” Buff, who was rather inconveniently already engaged.  Despite this awkward situation, Lotte, her fiancée, and Goethe eventually became friends.  Also while in Wetzlar, Goethe became re-acquainted with a former classmate from his Leipzig days, another young lawyer named Carl Wilhelm Jerusalem.  He was in love with yet another engaged young woman, Elisabeth Herd, though the outcome of this relationship was much less pleasant than the resolution of Goethe’s love for Lotte.  Unhappy with his legal career, lonely in Wetzlar and spurned by Fraülein Herd, Jerusalem committed suicide.


Goethe’s love for Lotte, along with the story of Jerusalem’s unrequited love for Elisabeth Herd and his suicide, formed the inspiration for Goethe’s first, spectacular, literary success, Die Leiden des jungen Werthers (The Sorrows of Young Werther) published in 1774.  Written as a collection of letters by the title character, it tells the story of an intelligent and handsome young man’s impossible love for a betrothed woman, his mental and emotional disintegration and eventual suicide.  It was an instant sensation and was soon translated into French and English.  Stylish young men even began to affect the outfits Werther describes in the novel.  More importantly for Goethe himself, he became, almost literally overnight, a cultural celebrity.


The year after the publication of Werther, Goethe got engaged to be married, but also received an invitation from the young duke of Saxe-Weimar-Eisenach, Karl August, to visit his court as his personal guest.  Goethe abruptly broke off his engagement and moved to Weimar where he lived for the rest of his life.


In the following years, Goethe was appointed to the Duke’s Privy Council and held a number of positions at court.  In 1782 the Duke ennobled him, thus adding “von” to his name.  He was also granted a large house on the Frauenplan in Weimar, which is now the Goethe National Museum. While working at the ducal court, Goethe developed a number of plans for reforms, drawing on Enlightenment ideas, but these found little support.  Indeed, he never quite fit in with the court (though the Duke remained his friend and admirer) and his reformist plans had gone nowhere.  In 1785, he resigned from the Privy Council and began a two year trip to Italy, eventually settling in Rome.  In 1788, lured by the entreaties of his old friend and benefactor, Duke Karl August, he returned to Weimar.


Goethe’s trip to Italy was very important for him.  It rejuvenated his creative spirits, but also revived in him his admiration for the Classical tradition.  The rest of his life was a struggle between his devotion to this tradition, and his fascination with the changes going on around him.  This collision of neo-classicist Enlightenment ideals, the new ideas of people like Herder and the authors in the Sturm und Drang movement, and the developing spirit of Romanticism, evolved into a style subsequently known as Weimar Classicism.  This movement reached its apogee after Goethe met and befriended the historian, playwright and poet Friedrich Schiller (1759-1805) in 1794.  They influenced each other’s work, together attempting a reconciliation of the emotional, sentimental and proto-romantic impulses of the Sturm und Drang style with the rationalism of the Enlightenment.


In the meantime, in the same year he returned from Italy, Goethe began a long-term romantic relationship with Christiane Vulpius (1765-1816), the daughter of one of the Duke’s functionaries. They lived together as husband and wife, but Goethe’s Freethinking anti-Christian commitments precluded marriage, which could only be performed in a church ceremony.  Despite the social inconveniences this entailed, they seemed to have been very happy, and together had five children, only one of whom, August, survived into adulthood.


During this period, Goethe also embarked on a number of different projects.  He explored different scientific fields including geology (he had by some accounts the best collection of minerals in Europe) and in 1790 he published a book on Botany. A life-long interest in painting and drawing led him to explore the sciences of optics and theories of color, resulting in the publication in 1791 of Optical Essays.


Unlike many other German intellectuals and artists, Goethe was highly ambivalent about the French Revolution, and later about Napoleon. Schiller’s untimely death in 1805 was a horrible blow to Goethe’s emotional and physical health.  But worse was to come. In October 1806 Napoleon’s army defeated the Prussians at the Battle of Jena, only a few miles from Weimar, which was quickly occupied and sacked.  Goethe’s house was itself invaded by marauding French soldiers who were, the story goes, forced out by Christiane’s determination and courage, leaving their home mostly intact.  A few days later, Goethe finally married her.


The defeat of Napoleon at Leipzig in 1813 and the ensuing fall of his empire left Goethe with mixed feelings.  He was surely happy about the liberation of Germany, but was hardly sympathetic to the reactionary policies and ideology of the Holy Alliance that now dominated continental Europe.


In the midst of this turmoil, Goethe finally completed and published, in 1808, what became one of his most famous works, The Tragedy of Faust, a verse drama. In Goethe’s version of this ancient legend, Faust emerges as the epitome of modern man, with an unquenchable lust not only for knowledge, but for power and pleasure. Also around this time he discovered the poetry of the fourteenth century Persian poet Hafiz and was so moved that he began to write poetry in his style.  Much of it was intended for a woman, Marianne Jung, whom he had met and befriended during a trip to the Rhineland.  His collection of these poems was finally published in 1819 as “Poems of East and West.”  Besides this project, he worked on the second part of Faust (completed the year of his death) and also supervised a publication of his collected works. But his personal life and health faced serious challenges.  Christiane died in 1816 and in 1821 he almost died of heart disease.  In 1830 his son August died of smallpox in Rome.  Goethe's weak heart finally gave out and he died in 1832.  According to legend, his last words were “mehr licht!” (more light!).


The importance of Goethe to world literature, and especially to the intellectual history of the German-speaking world, can hardly be overestimated.  His poems and plays served as the inspiration to numerous later literary and musical works, and lines from them have crept into the German language as popular expressions.