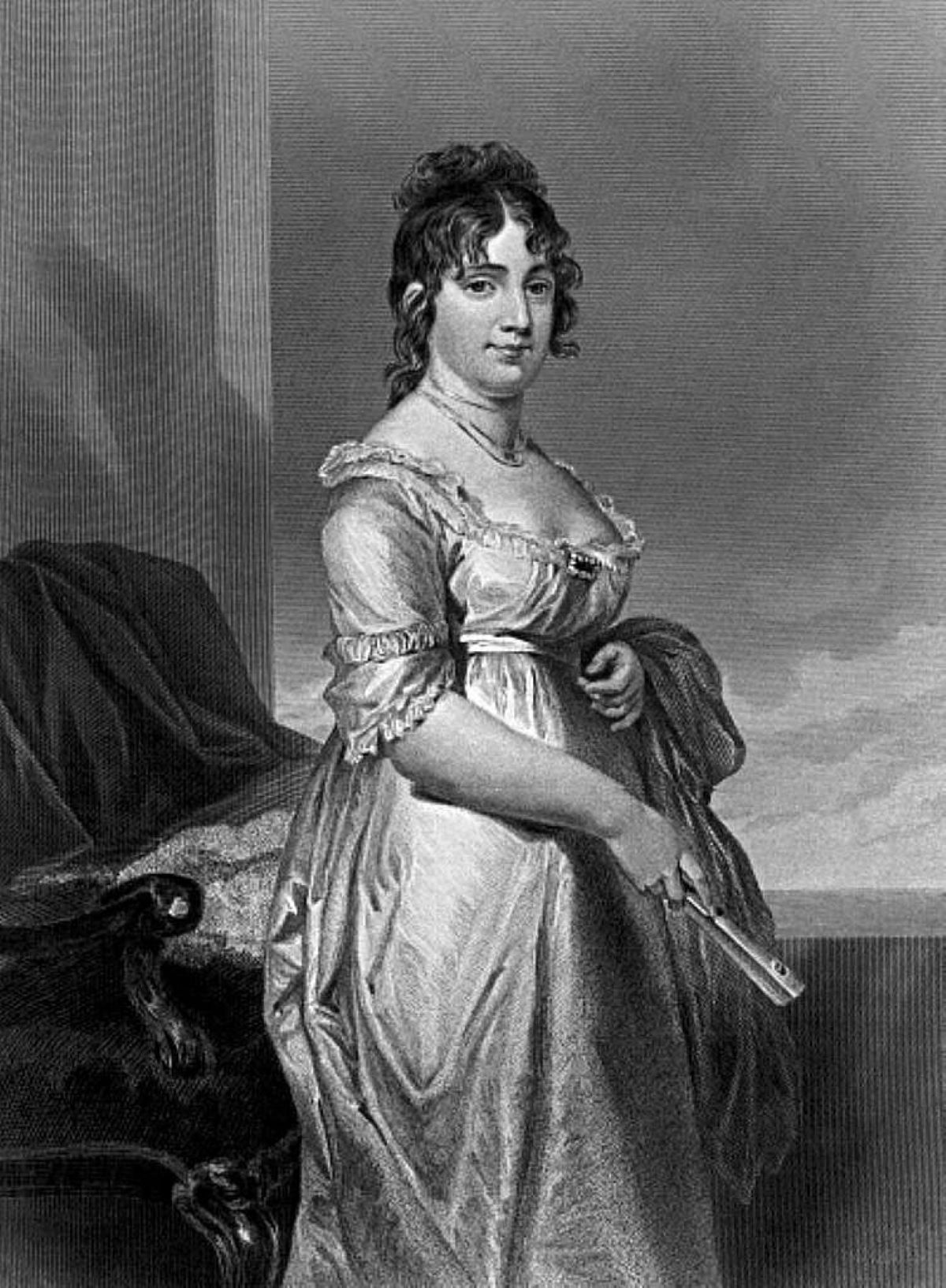 One of the animating questions of the women’s movement in America has long been how much or even whether women should use the qualities and skills traditionally associated with their sex or whether they should try to overcome those qualities in order to achieve equality in public and private life. Dolley Madison is clearly an early advocate for judiciously using all those qualities and skills traditionally associated with femininity and in the early republic she became known, ironically, as the Queen of America.

Some readers may recall that Dolley Madison was well known for her parties. But these were more than fetes, rather they were her early attempts to create the habits and practices of a democratic republic in everyday life. When Jefferson was running for president, Martha Washington’s parties were widely criticized in the press for imitating the “paraphernalia of court aristocracy” (Parlor Politics, p. 20). For example, Martha had an elevated platform at her parties and she received her guests while sitting. Jefferson had worried about these features after his time as ambassador in Paris. He understood how easily aristocracies took hold through manners and ceremonies. So, when Jefferson arrived at the President’s House, he reduced the Republican Court created by the Washingtons to only two official receptions, New Year’s Day and the Fourth of July. However, his intimate dinner parties were among the most well-known in Washington City. It was where the work of politics was done. And Dolley Madison was right there with him.


Because Jefferson was a widower, Dolley initially helped him plan and host these parties. Jefferson was hospitable and generous and was even known to serve the food himself. Eventually, when Dolley lived in the President’s House, the parties became known as “squeezes” because there would be so many people that they had to squeeze together into the rooms. They were democratic affairs, with a mix of people, men and women, high and low. And it was this seeming commitment to democracy or what Jefferson called “the pell-mell” (the mixing) that resulted in the scandalous Merry Affair. The Prime Minister of England and his wife were received for dinner at the President’s House. Traditional etiquette required President Jefferson to escort the lady of honor, Mrs. Merry, to the dining room and to her seat. Instead, Jefferson took the arm of Dolley Madison and sat her next to him. The Federalist press was aflame with outrage. In his official dispatch on December 7, 1803, Minister Merry complained of his treatment and noted, “the excess of the democratic ferment in this people is conspicuously evinced by the dregs having got up to the top” (Parlor Politics, p. 38).


When James Madison inherited the Jeffersonian Presidential House, it was in disarray, a metaphor for the state of the Union itself. While Jefferson had been a charismatic leader, his strength was in opposition. He was less talented in cultivating what came next. The early republic was plagued with tensions around how (or even whether) to create national unity and what would constitute a recognizable national authority. By inventing her unique style, Dolley Madison made republicanism, with its particularly ideological and abstract ideals of manners, into a working reality. She tied the government, symbolized by the national capital and the President’s House, more closely to the lives of ordinary Americans than any other politician before her. She brought a unique combination of glamor with a self-consciously democratic flair.


Yet, for all her innovations and commitments to creating republican habits and culture, Dolley Madison still had some of the dispositions of an enslaver. She and James owned close to 75 slaves at Montpelier. After James died, financial pressures compelled her to sell many of her slaves to her creditors. This was the plantation economy – enslaved people were counted as an asset. But Dolley did worse than that. In a fit of pique, she sold Ellen, the daughter of her personal enslaved maid, Sukey, as well as Sukey herself, because Ellen had dared to try to escape on the Pearl.


Free blacks and abolitionists had organized the escape, attempting to make the 200-mile-plus journey to the free state of New Jersey in April 1848. Ellen was most likely “aided by Paul Jennings, one of the most well-known former Madison slaves who was then living as a freedman in Washington City. The “Pearl Incident” was the largest non-violent slave escape attempt in American history. …The runaways were recaptured and Ellen was jailed in Baltimore. Abolitionists heard her story and a local physician bought her freedom and helped her get to Boston.” (Women of Montpelier) History did not record what happened to Sukey. Part of the reason that Sukey’s story is lost is because she did not know how to read and write. The Madison’s did not teach their slaves to do so.


Generally, it is not appropriate to hold historical figures to the ethical standards of the present; but, in this instance, Dolley Madison had the religious and social resources to behave otherwise. She had been raised as a Quaker in a family which opposed slavery. Her father had freed his slaves and moved his family to Philadelphia because of this prohibited act. (It was against the law to free slaves in North Carolina in 1783.) Dolley also had nearby political models - her contemporaries Eliza and Alexander Hamilton did not own slaves. Even her husband, James, had asked her to free their slaves when she died. She did not. The abolitionist newspaper of the time, The Liberator, complained that Dolley was not as poor as she claimed and had behaved unjustly. Finally, psychologically, Dolley knew the pain of losing a child – her youngest son and first husband had both died of yellow fever on the same day in 1793.


There was both ruthlessness and a sense of entitlement to her behavior. The plantation household was obviously a cruel and complicated place of loyalty, domination, and dependence. There was also the striking irony that when Dolley fled the President’s House in 1814 before the British burned it to the ground, she turned to two of her slaves and asked them to ensure that the Gilbert Stuart painting of George Washington was preserved. Paradoxically, it was enslaved hands that cut the 8-foot canvas of the slave-holding father of liberty from its frame and brought it to safety.


So how might we understand the complexity of Dolley Madison’s commitments and behaviors? One way is to turn to James Fenimore Cooper. Two decades later, Cooper would worry that the institution of slavery was damaging the ethical sensibility of the slaveholder, “it leads to sin in its consequences, in a way peculiarly its own, and may be set down as an impolitic and vicious institution.” (The American Democrat: Or, Hints on the Social and Civic Relations of the United States of America, 1838; reprinted, 1981). Cooper worried that slavery was damaging the very foundations of American democracy: autonomy, restraint, and education. And, perhaps that’s the lesson of Dolley Madison. She was a pivotal republican whose judgment was jeopardized by the institution that as Cooper noted, “depends on an uncontrolled will, on the one side, and an abject submission, on the other.”


Dolley Madison is a reminder of the corrosive effects of such a relationship on both the enslaver and the slave; there were no democratic practices, no republican habits that could overcome the moral and social degradation embedded in the institution of slavery. That would have to wait for a second American revolution, the Civil War. But rather than dismiss (or cancel) Dolley for her myopia, understanding and remembering her illuminates not only the role of republican women in cultivating some of the most aspirational elements of early American democratic culture and sensibility, but reminds us, too, of how deeply the acidic effects of slavery corroded the moral and political behavior sometimes of even our otherwise most admirable founders.
Works Cited
Allgor, Catherine. Parlor Politics: In Which the Ladies of Washington Help Build a City and a Government. Charlottesville: University of Virginia, 2000.
Cooper, James Fenimore. The American Democrat: Or, Hints on the Social and Civic Relations of the United States of America. Cooperstown, New York: H & E Phinney, 1838.
James Madison’s Montpelier. “The Women of Montpelier.” https://www.montpelier.org/learn/the-women-of-montpelier.