Unpersuaded; or, Ten Ways to Lose an Austen Reader 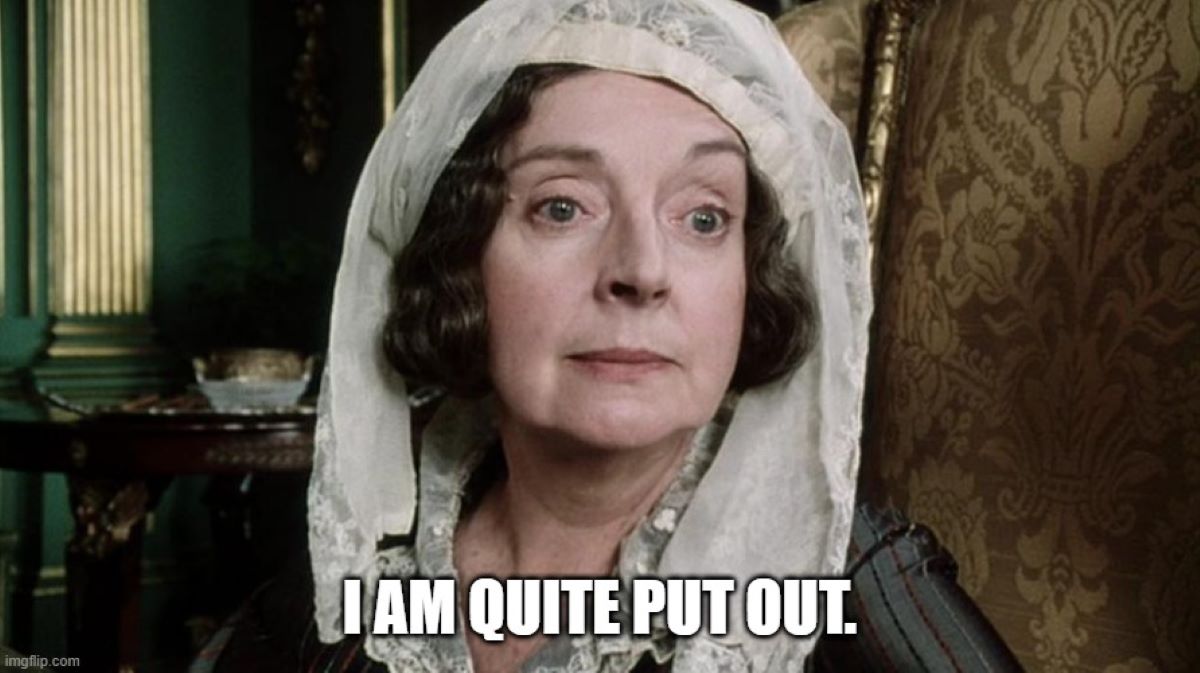 It is a truth universally acknowledged that a reader in possession of a Jane Austen novel must be in want of a film adaptation.  In fact, such readers want many film adaptations, if not to revisit Austen's world then to have the pleasure of explaining how the filmmakers are more clueless than Cher Horowitz.
Such is the case with Netflix's recent adaptation of Persuasion, which illustrates ten ways to lose your Austen audience's admiration.

1. Just add vino: Netflix turns Austen's protagonist, Anne Elliot, from an elegant woman with a refined mind into a wine-guzzling lush who wallows in bed with her pet bunny.  One would at least expect such habits to contribute to Anne's faded appearance, which Austen emphasizes at the start of the novel. Instead, the heroine (played by Dakota Johnson) looks gorgeous from start to finish.

2. Replace the narrator: Anne then supplants Austen's third-person narrator, offering her own ironic view of her family and broken engagement to Captain Wentworth.  Soon we know entirely too much about Anne Elliot's keepsake box, from which she draws locks of hair of not only Captain Wentworth but his horse.  Funny? Yes.  Faithful? No.

3. Alter a key message: This empowered Anne then changes Austen's point about why Anne felt justified in breaking her engagement with Wentworth eight years earlier.  Austen's Anne says she was young and right to be guided by the advice of Lady Russell, who was her deceased mother's best friend.  Yet eight minutes into this film, Anne moans that she was wrong to do so.

4. Replace pathos with humor: When Captain Wentworth returns to the area—a hero with money—Anne suffers agonies during their first, brief encounter. This film has their reunion occur during breakfast at her sister Mary's house. He arrives while Anne is entertaining her nephews by wearing a fruit bowl as a hat and a smear of jam as a moustache.

5. Insert farce: As in Austen's novel, Wentworth and Anne encounter each other again at a dinner party. While Austen's heroine suffers in dignified silence, Netflix's Anne devolves into a clone of Bridget Jones.  She refuses to sit next to Wentworth at dinner and shuffles around the table until she finds a seat at the opposite end, from which she yells that Mary wed Charles Musgrove after Anne herself rejected him.

6. Go Wilde: In the midst of these trials, the proper Lady Russell hints at her own double life.  In what appears to be a scene lifted from The Importance of Being Earnest, Lady Russell confess she visits the Continent for that.

7. Imitate other films: Meanwhile, Netflix's Anne shows a racy side in the episode in which she, Wentworth, and the Musgroves travel to Lyme to see Wentworth's naval friends.  Anne dives fully clothed into the ocean for a swim.  Yes, that would be on a public beach.  No, it does not have the same impact as Mr. Darcy's Wet White Shirt.

8. Add self-help lessons: While at Lyme, Anne meets Wentworth's friend Captain Benwick, who deepens his own depression over the death of his fiancée by reading Romantic poetry, especially by Byron.  Austen's heroine suggests reading prose works from moralists to strengthen the mind.  This Anne advises less Byron and more self-coaching: "you will be happy again."

9. Change a character: At Lyme, Anne also meets her cousin Mr. Elliot, who is her father's heir yet has been estranged from the family for some years.  He pursues her, especially when she arrives in Bath. That is true to the novel. The difference is that this Mr. Elliot confesses that he wants to ensure that Sir Walter does not marry Mrs. Clay, who might produce a male heir.  In Austen's novel, he achieves that goal by seducing her; in this film, we see a moral Mr. Elliot marry Mrs. Clay himself.

10. Wink: Finally, the romance at the heart of the novel is consistently overwritten by the humor, rendering the film's ending anticlimactic.  Anne has no second spring because she has always been lovely.  She and Wentworth have no conversation to make sense of their past or growth: they just get married. The novel concludes with her literally winking at the reader while they discuss the navy.
Persuasion is a novel about moral judgment, a shifting social structure, and second chances. In turning Austen's work into a comic romp narrated by a bombshell, this film does Austen and her readers an injustice.  We are not persuaded.

As always, you are an amazing literary expert and observer of details. I on the other hand couldn’t get past the casting of Dakota Johnson. Just, NO!

Spot on!! Truly not persuaded and sad to know for many viewers, this is the only Anne that will ever be and that will lose the chance to dive into a wonderful novel by an extraordinary writer. #notpersuated