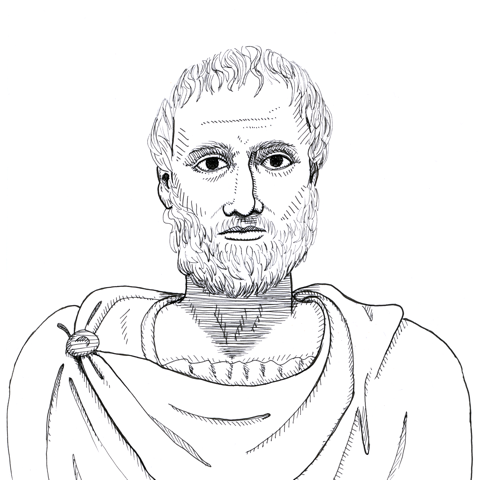 Found in The Politics vol. 1

In his Politics, Aristotle believed man was a "political animal" because he is a social creature with the power of speech and moral reasoning:

Hence it is evident that the state is a creation of nature, and that man is by nature a political animal. And he who by nature and not by mere accident is without a state, is either above humanity, or below it; he is the ‘Tribeless, lawless, hearthless one,’ whom Homera denounces—the outcast who is a lover of war; he may be compared to a bird which flies alone.

Aristotle’s statement that man is a “political animal” can be taken in a number of ways. One reading is to say that man is naturally sociable (the Pufendorf-Grotius line) and that they are naturally drawn to various political associations in order to satisfy their social needs. Another reading, which sees the word “political” in a less charitable light, might state that, since politics is based upon violence and threats of violence, the phrase emphasises the “animal” side of human nature rather than its rational and cooperative side. Those who turn their back on the violence inherent in politics, in Aristotle’s view, also turn their back on society - they declare themselves to be outlaws, without a “tribe”, and without a heart. His likening them to a “bird which flies alone” reminds me of the Rudyard Kipling story in The Just So Stories (1902) about “The Cat who walked by Himself”, because he of all the wild animals refused to be domesticated by human beings. Of course, there is also Robert Frost’s poem “The Road not Taken” (1920) with the line about choosing “the one less traveled by”. Is this such a bad thing?