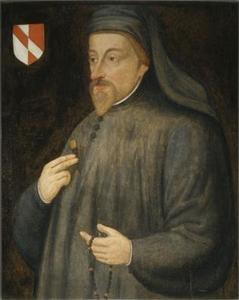 Chaucer was born in London and is often considered the father of English literature and the best English poet before Shakespeare. Chaucer spent his life at court, serving three successive English monarchs: Edward III (r. 1327-1377), Richard II (r. 1377-1399), and Henry IV (r. 1399-1413). In his official capacity Chaucer went on several diplomatic missions and in Italy was introduced to the works of Boccaccio, Dante, Petrarch, and Boethius, which influenced his own work in both form and content.