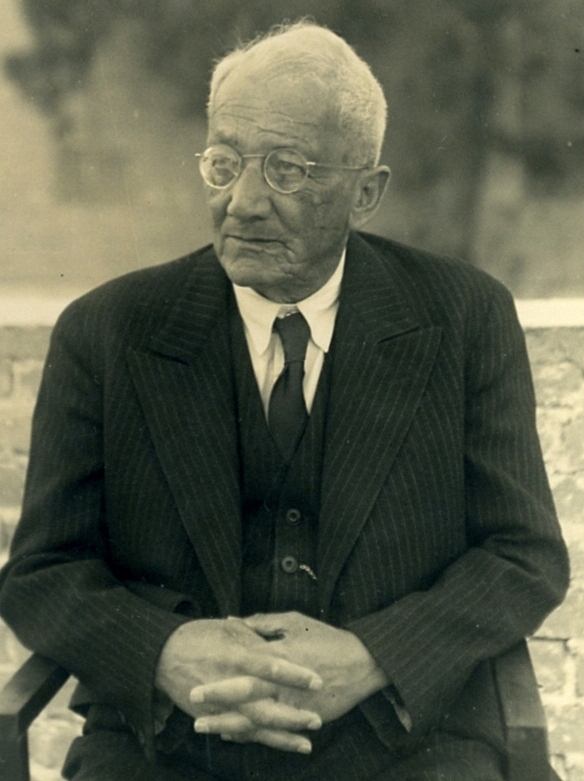 This month’s featured birthday anniversary is that of the German sociologist Franz Oppenheimer, best known for his work on the sociology of the State, which subsequently became tremendously influential among anarchist and libertarian political philosophers.

Oppenheimer, a rabbi’s son, was born into a middle-class family in the suburbs of Berlin. He studied medicine in Freiburg and Berlin and practiced medicine in working-class districts of Berlin from 1886-1895. During those years, he became deeply moved by the plight of his patients and the effects of their living and working conditions on their health. This led to a growing interest in political economy and history, and he returned to school, writing a dissertation on David Ricardo and receiving a doctorate from the University of Kiel in 1908. In 1909 Oppenheimer became a Privatdozent in Economics at the University of Berlin and in 1919 was appointed full Professor and Chair of Sociology at Johann Wolfgang Goethe University in Frankfurt am Main (the first such academic position in Germany). In his ten years there he emerged as a popular and influential presence. Among his many students who became prominent later in life perhaps the most noteworthy was Ludwig Erhard, the future finance minister and Chancellor of the Federal Republic of Germany, and the author of the post-war German “economic miracle.” Erhard, for his part, was lavish in his praise of Oppenheimer, and credited him with the inspiration for his own ideas about the German “social market economy.” In 1929, Oppenheimer left Frankfurt for health reasons and moved back to Berlin.

In the meantime, he developed a political economic system that has been variously described as “liberal socialist” or “left libertarian.” While broadly supporting private property and the free market, Oppenheimer was suspicious of capitalism and believed that market exchanges and material prosperity could be better achieved within the framework of voluntary collectivist or communitarian social arrangements. Politically, despite his socialist sympathies, he was drawn not to the powerful German Social Democratic party, but to the growing ranks of the “national liberals” represented by the likes of Friedrich Naumann and Max Weber. He emerged, especially, as an ardent foe of the Prussian landed nobility (the Junkers) and called for the break-up of their great estates and the establishment of agricultural cooperatives in their place. His ideas about agricultural economics and reform have often been compared to those of Henry George, whom Oppenheimer himself openly admired.

Oppenheimer’s ideas about political economy, as well as his growing interest in Zionism, together led to his important contributions to the development of communal Jewish agricultural settlements in Palestine. Perhaps the most noteworthy of these was the establishment of a cooperative farm called “Merhavia” (the first Zionist settlement in the Jezreel Valley) in 1911.

But probably his most important intellectual contribution (based, on his own admission, on the ideas of the Polish sociologist and economist Ludwig Gumplowicz) was his work on the history and sociology of the State. This work was, in turn, based on Oppenheimer’s insight that there are basically two ways human beings have of securing the necessities of life. He termed these the “economic” and “political.” In their most basic forms, the economic way of making a living focuses on the making and selling of commodities and provision of services in a peaceful and cooperative context, whereas the political way is based on appropriating wealth by means of force. He called the sociological manifestation of the economic way of making a living “Society,” and the political way of making a living “State.” He developed a detailed historical narrative built on this sociological architecture, in which the origins of the State are to be found in gangs of ancient warriors who preyed on settled but loosely organized groups of herdsmen and agriculturalists. The warriors eventually realized that they could seize more of the produced wealth from the farmers by instituting regular tribute payments (the origins of taxation) than by plundering everything moveable, burning the rest, and moving on. Thus, States originated not in a social contract of some kind but through the violent imposition of power by one group over another. The fullest and most detailed exposition of his views is presented in his 1908 book Der Staat which was eventually translated into dozens of languages (the first English translation, as The State, appeared in 1922).

While Der Staat created a sensation in Germany upon its publication, it also exercised an important influence in American intellectual circles. The influential critic and political thinker Albert Jay Nock was, in particular, profoundly impressed by Oppenheimer’s ideas about the state and expounded upon them at some length in his important six-part essay, also entitled “The State,” published in 1923 in The Freeman. Nock’s work, in turn, influenced such later American libertarian luminaries as Frank Chodorov and Murray Rothbard.

Oppenheimer continued writing and working after his retirement from Frankfurt, publishing his massive four volume System of Sociology from 1922-1929, besides on-going work on proposed agricultural settlements in Mandatory Palestine. He regarded both the Communists and the growing National Socialist German Workers Party with dread, seeing both movements as representing unabashed tyrannical ideologies based on plunder and violence. His worst fears were confirmed after the National Socialists seized power in Germany in 1933, confiscating his modest fortune and cancelling his pension, forcing him to flee the country with his daughter Renate. He taught in Palestine for a time and then found work as a lecturer at the University of Kobe in Japan. In 1936 he was appointed an honorary member of the American Sociological Association and moved, in 1940, to Los Angeles. He continued to publish and work, founding the American Journal of Economics and Sociology in 1941. He died in Los Angeles in 1943.