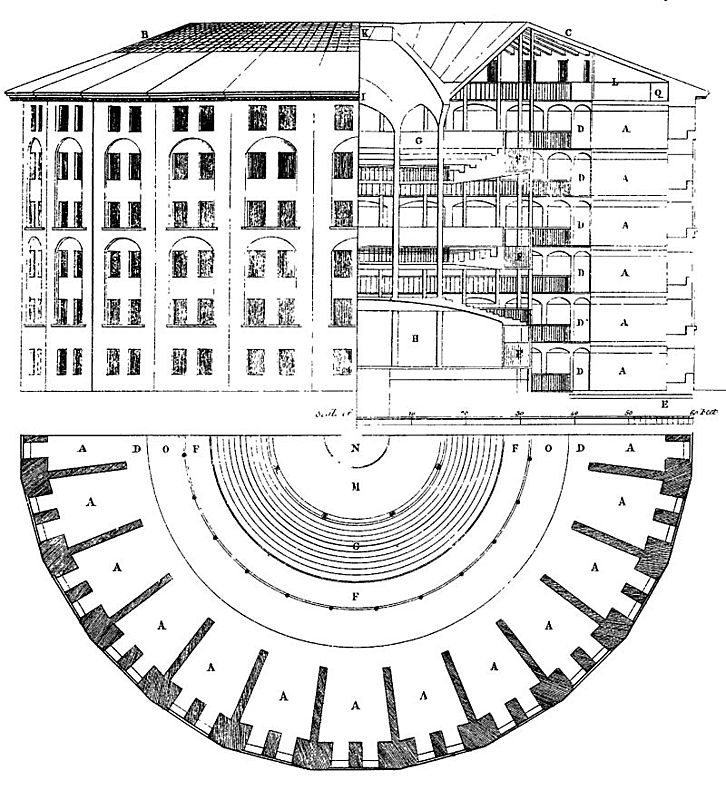 This month’s featured birthday anniversary is the English philosopher, economist and reformer Jeremy Bentham, best known as the founder of Utilitarianism. Through his vast writings he influenced many subsequent philosophers, perhaps most famously John Stuart Mill.

He was born in London into a wealthy Tory family, one of the two sons of Jeremiah Bentham (1712-1792) and his first wife, Alicia Whitehorn (d.1759). His brother Samuel (1757-1832), with whom he was very close, was an engineer and diplomat. Jeremy was a child prodigy, who was studying Latin by age three and who, by the age of seven, played Handel sonatas on his violin in the evenings to entertain the family. After passing a pleasant childhood, largely at his family’s country houses, he entered Westminster School in 1760 and then Queen’s College, Oxford, where he earned his Masters Degree in 1766. His time at school was not happy, and he formed the beginnings of a mistrust of the aristocracy and existing legal theories and practices that would only intensify as he grew older.

Along these same lines, Bentham also began to question the idea, basic to English legal and political philosophy, of Natural Rights. Like some other British philosophers of the time, he was very suspicious of the idea of Natural Rights, linked as they were to the American and French Revolution. Eventually Bentham came to regard the entire idea of Natural Rights as a preposterous fiction, famously declaring it “nonsense on stilts.” He instead was increasingly drawn to earlier philosophers, especially Cesare Beccaria, who postulated a legal-ethical theory based on the idea of “utility;” the amount of pleasure produced by a given action or set of circumstances. Bentham worked for years developing his ideas on this subject, coining the term “utilitarian” in 1781. He finally published his own ideas on utilitarianism in 1789 in An Introduction to the Principles of Morals and Legislation.

While earlier philosophers had been interested in the idea of utility as linked to pleasure and pain, Bentham’s (immense) contribution to the concept was two-fold. On the one hand, it encompassed both a psychological and an ethical aspect. That is, it explained the psychological motivations for all action as based on an aversion to pain and a quest for pleasure. Ethically, Bentham’s utilitarianism argued that a “good” act was one which produced the most pleasure while a “bad” act, conversely, produced pain. Importantly, Bentham held that his ideas about utility did not apply only to humans. He spoke out against cruelty to animals on the grounds that they could suffer and feel pain. The other important contribution of Bentham’s formulation of utilitarianism was its implications on government and legislation. Whereas earlier writing on the subject suggested that some understanding of utility should inform either the goals or the standards of legislation, Bentham argued that it should supply both. That is, the goal of legislation should be the increase of pleasure (and decrease in pain) for the majority of the population, while the standards for carrying out such legislation should be based on the same principle. In An Introduction to the Principles of Morals and Legislation Bentham fleshed out these ideas and provided a detailed examination of how legislation, especially the criminal code, could be reformed along utilitarian lines. Indeed, Bentham’s utilitarianism presented a particular problem in terms of crime and punishment. Appalled by the existing state of the British criminal justice system, he feared that the penal codes and prison conditions produced far more pain, and thus created more evil in society, than was necessary, and Bentham spent many years advocating for reforms.

Besides his utilitarian arguments for reforms to the British penal code, perhaps the most dramatic example of these efforts was his long advocacy for the panopticon, an idea (developed in 1786 or 1787) he freely admitted was suggested by his brother Samuel. The entire panopticon project consumed Bentham’s energy and much of his money for over a decade. The panopticon was a circular building, suitable for use as a hospital, workhouse or other institution where people needed to be monitored or supervised, but Bentham’s main idea was to use the panopticon as a prison. It was designed so that a single person, or at any rate a very small number, could watch every single prisoner, while they themselves would be out of sight. Thus, the individual prisoners would never know whether they were, in fact, being watched at any given time, but would have to behave as though they were. In this way, only a small handful of wardens could keep order over a large prison population.

Bentham formally proposed his panopticon idea (after hiring an architect and publishing a book on the subject) to parliament in 1794. After some initial interest, the government decided to drop the project in 1803. Following a brief revival in interest in 1811, the entire idea was finally abandoned in 1812.

The failure of the panopticon project left Bentham angry and bitter, and also pushed him further to the republican left. His life-long dislike of the aristocracy was only intensified by the whole affair, as he blamed them for lacking the courage and imagination to support the project. His remaining two decades demonstrate an increasing radicalism as he continued to work on educational, legal, and electoral reform.

He had, by this time, become quite famous and had attracted a large circle of friends and admirers, many of whom, such as the philosopher James Mill, and his son John Stuart, were to emerge as important utilitarian philosophers in their own rights. John Stuart Mill dubbed their loose-knit group the “Philosophical Radicals.”

In 1826 Bentham helped support the opening of the University of London (renamed University College London in 1836). Though his own role in the creation of the university is often exaggerated, it did represent a vindication of many of his reformist ideas by becoming the first institution of higher education in England that would admit students regardless of their race or religion.

But Bentham’s connection to University College is much better known because it became his final resting place. In the year before his death he wrote a (never published) pamphlet on “auto-iconism.” In it, he argued that even in death people could contribute to the betterment of society by donating their bodies to science. Thus, in his will, he directed that his corpse be donated to the University for medical dissection, following which it was to be preserved, dressed in his usual clothes, and put on display for the edification of the public.

Jeremy Bentham died on June 6, 1832 and has been sitting proudly in University College London ever since.