The Commonsense of Political Economy 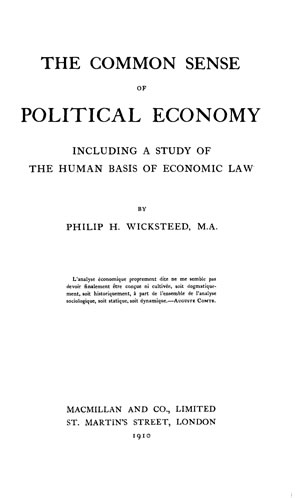 Contemporaneously with, though slightly following, Marshall, this book was one of the first “modern” textbooks leading from the 19th into the 20th century. Wicksteed substantively furthered the work of John Bates Clark on marginal productivity theory. Although Marshall’s Principles generally receives more attention, Wicksteed’s explanations are sometimes clearer, more precise, and more modern.

The Commonsense of Political Economy, including a Study of the Human Basis of Economic Law (London: Macmillan, 1910).