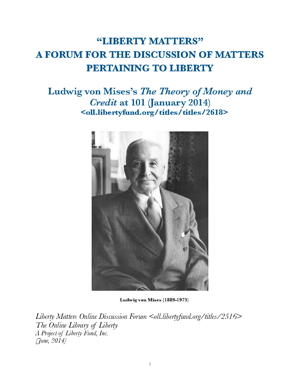 Liberty Matters: Ludwig von Mises’s The Theory of Money and Credit at 101 (January, 2014)

This online discussion is part of the series “Liberty Matters: A Forum for the Discussion of Matters pertaining to Liberty.” Lawrence H. White revisits Mises' pathbreaking 1912 book on Mises’ book The Theory of Money and Credit. The soundness of his theory of money is tested against the recent emergence of a new form of currency known as Bitcoin. Responding to his essay are Jörg Guido Hülsmann, Jeffrey Rogers Hummel, and George Selgin.