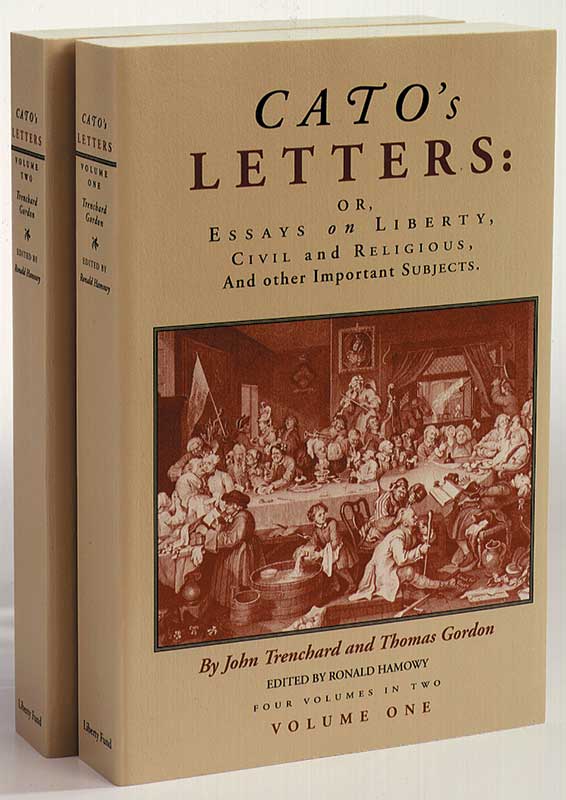 Thomas Gordon was the joint author with John Trenchard of these 4 volumes. Almost a generation before Washington, Henry, and Jefferson were even born, two Englishmen, concealing their identities with the honored ancient name of Cato, wrote newspaper articles condemning tyranny and advancing principles of liberty that immensely influenced American colonists. The Englishmen were John Trenchard and Thomas Gordon. Their prototype was Cato the Younger (95-46 B.C.), the implacable foe of Julius Caesar and a champion of liberty and republican principles. Their 144 essays were published from 1720 to 1723, originally in the London Journal, later in the British Journal. Subsequently collected as Cato’s Letters, these “Essays on Liberty, Civil and Religious” became, as Clinton Rossiter has remarked, “the most popular, quotable, esteemed source of political ideas in the colonial period.” This new two-volume edition offers minimally modernized versions of the letters from the four-volume sixth edition printed in London in 1755.

Cato’s Letters, or Essays on Liberty, Civil and Religious, and Other Important Subjects. Four volumes in Two, edited and annotated by Ronald Hamowy (Indianapolis: Liberty Fund, 1995).