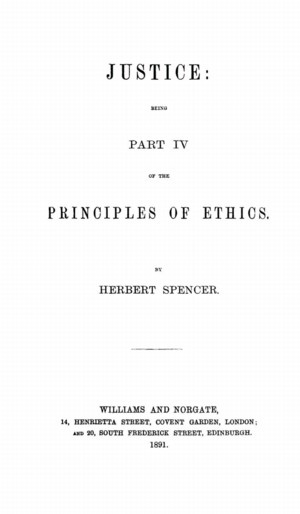 Justice: Being Part IV of the Principles of Ethics (1891)

Spencer’s most developed version of his political philosophy which grounds his theory of the state on an idea of justice based on certain rights of physical integrity, movement, property, and exchange. He then expands this theory to include a discussion of the rights of women and children (quite novel for the 19th century) and the nature of the state. He concludes that a state with very limited powers is best suited to allow human beings to flourish.

Justice: Being Part IV of the Principles of Ethics (London: Williams and Norgate, 1891).