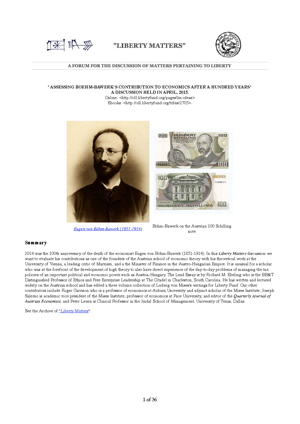 This online discussion is part of the series “Liberty Matters: A Forum for the Discussion of Matters pertaining to Liberty.” In this discussion the contributors evaluate the contributions of Eugen von Böhm-Bawerk (1851-1914) who was one of the founders of the Austrian school of economic theory with his theoretical work at the University of Vienna, a leading critic of Marxism, and a the Minister of Finance in the Austro-Hungarian Empire. The Lead Essay is by Richard M. Ebeling who is the BB&T Distinguished Professor of Ethics and Free Enterprise Leadership at The Citadel in Charleston, South Carolina, with additional essays by Roger Garrison, professor of economics at Auburn University and adjunct scholar of the Mises Institute; Joseph Salerno, academic vice president of the Mises Institute, professor of economics at Pace University, and editor of the Quarterly Journal of Austrian Economics; and Peter Lewin, Clinical Professor in the Jindal School of Management, University of Texas, Dallas.