Home / Titles / The Parallel Bible. Old and New Testaments (KJV and Revised Version) / The Gospel According to S. Mark (KJV)

The Gospel According to S. Mark (KJV) 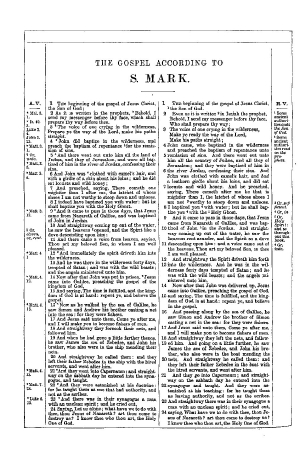 The Second Gospel of the New Testament. A parallel version with the King James Version in one column and the revised Version in another column. His is the oldest of the four Gospels and was used extensively by both Matthew and Luke in their work. The Gospel of Mark is traditionally said to have been based on the teachings of Peter, Mark’s close companion and mentor. It is a chronological version of the life of Christ notable in part for the large number of parables it contains. The work reveals gradually the full nature of Jesus, his role on earth and in heaven, and the significance of the New Covenant.

The Parallel Bible. The Holy Bible containing the Old and New Testaments translated out of the Original Tongues: being the Authorised Version arranged in parallel columns with the Revised Version (Oxford University Press, 1885). The Gospel according to S. Mark.