The Book of Job (KJV) 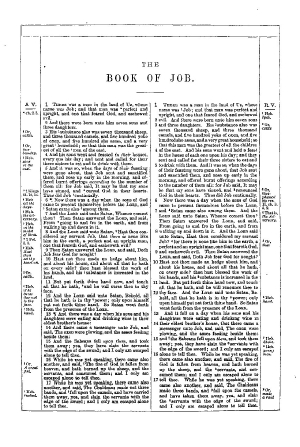 Job is the central character in an ancient story written down as the Book of Job in either the fifth or sixth century B.C. This work is acclaimed as one of the great masterpieces of early literature and a fundamental commentary on the human condition.

The Parallel Bible. The Holy Bible containing the Old and New Testaments translated out of the Original Tongues: being the Authorised Version arranged in parallel columns with the Revised Version (Oxford University Press, 1885). The Book of Job.